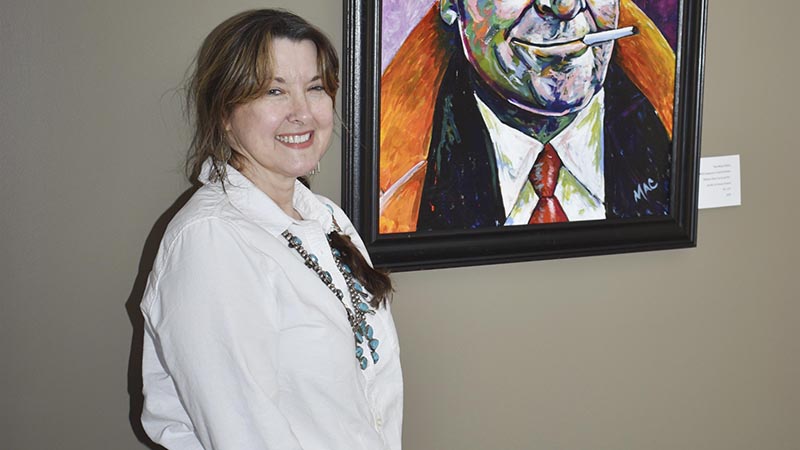 WEST POINT — There are not many places an artist can display their work in West Point but one group is looking to fix that.

McElvy explained that the idea for the project began earlier this year after she saw a Facebook post about a building in downtown West Point.

“I thought, ‘That would be a good art gallery,’” she said, noting that thought led her to share it with others. “I then decided to fan the flames.”

She created her own Facebook group called the West Point Art Group and the conversation that started then is still ongoing.

“Everyone thinks it’s a great idea,” she said.

One of her first jobs was creating a directory of local artists and a GoFundMe account to raise funds for the project.

So far $600 has been raised with an eventual goal of $2,000. The money already earned has been spent on displays and lighting fixtures for upcoming shows.

With less than three months passed since creation, the group has already seen some success.

The New Horizon Theatre currently displays several of McElvy’s works, placed shortly before “The Nerd” was presented on Feb. 15. Plans are already in place to switch out the art for the “Legally Blonde: The Musical” performance on April 12-14.

“The idea there is to have pieces that match the themes of the shows,” McElvy said. “Like blonde and pink.”

A future plan in the works if for an outdoor show at Pokey’s in West Point sometime around the end of spring, beginning of summer.

“We’re also working with El Rio [Mexican Restaurant] to have a Dia de los Muertos [Day of the Dead] show on their outdoor patio,” she added.

When asked what her overall goal was, McElvy said, “To bring arts to downtown.”

She elaborated, saying she was recently asked by a friend what there was to do art wise in downtown West Point, but she could only answer in the negative.

West Point, she said, could have both.

Response to the project has been positive but McElvy said her goal is to somehow get a permanent gallery set up in the area.

“I hope that by having these things [events] it will encourage more bigger event,” she said. “I want artists to be recognized and exhibited and have a place for people to visit.”

McElvy’s love for the arts is multifaceted. She is the current president of the Visual Artists Alliance of LaGrange, a position she has held for the past four years while being a member for the past ten.

She is also an artist herself and works with acrylic paints, which she found her love for in 2014. She has received some accolades for her work and has even worked with the Valley High School Art Department.

You can find the West Point Art Group on Facebook for more information.