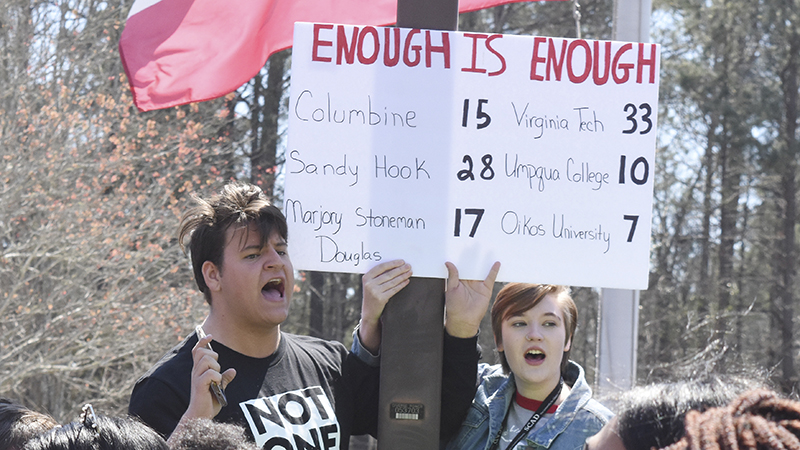 An estimated 120 students at Callaway High School walked out of school Wednesday afternoon in a protest against gun violence. They held signs — many saying “enough is enough” — and circled around the school’s flagpole to pray, chant for change and peacefully have their opinions heard.

Callaway High wasn’t the only local school to participate. Troup High School held a ceremony in the school’s gymnasium Wednesday morning, with about 150 to 200 students participating. Nationally, around 3,000 schools were involved in the walkout, which was held on the one-month anniversary of the shooting at Marjory Stoneman Douglas High School in Parkland, Florida, where 17 people were killed and numerous others were injured.

Toward the end of the Callaway ceremony, a moment of silence was held for the students who lost their lives in Parkland. The protest lasted 17 minutes in honor of the victims.

“We are here. We have opinions, they need to be heard, and we are tired of inaction,” said Layten Robinson, a senior at the school who helped lead Wednesday’s protest. “Things need to be improved, and there is always room for improvement.”

Robinson wore a shirt that said “not one more” and he held up a sign listing the number of people who were killed in other school shootings, including Columbine, Sandy Hook and Virginia Tech. Other signs read “protect children, not guns,” “#never again: enough is enough,” and “#enough student lives matter.”

“I would say that every student who walked out of that school today was a leader,” Robinson said. “We have rights. We deserve to be listened to. They should not look down on us because we are children. Their inaction scares us.”

There was a table set up where students could get information on registering to vote and how to contact Congressional leaders to have their voice heard.

“The walk out was definitely a great movement but we also wanted to put some more meaning behind that. We wanted students to have a way to funnel their frustrations into action,” Robinson said.

The event was organized over the last few weeks, after students went to Callaway High Principal Jonathan Laney and told him they were interested in taking part in the national protest, which was organized by the leaders of the annual Women’s March. Laney asked students to change the time from 10 a.m. to 2 p.m. because students from Callaway Middle School were set to visit Wednesday morning.

The students agreed, and the protest was scheduled.

Laney posted on Facebook Tuesday that the walkout was likely to happen, but noted that it was not a sanctioned event by the school.

He had asked students to keep it short and to ensure it was not disruptive to other students.

“They did what they told me they would do. They held up their end of the bargain, so I’m holding up mine,” Laney said. “I’m going to support them. I would’ve preferred that they handle it a different way, but they did a great job. They handled themselves appropriately. They have a right to have their voices heard, and I want to respect that.”

Laney said it meant the world to him that students were willing to work with him on the schedule instead of being disruptive and causing a scene for their eighth grade visitors. Several of the students who took part in Wednesday’s protest also spoke to eighth graders visiting the school.

“Tomorrow we have to go back to learning calculus. We have to go back to learning U.S. History, and they are not going to be successful in calculus and U.S. history if they don’t trust us, if they don’t trust we have their back,” Laney said. “I may not agree with them all the time. We may have disagreements, but I am always going to be willing to listen.”

Laney said most of the students protesting were upperclassmen, but students of all grade levels took part. There are an estimated 850 students at Callaway High School in total.

“I thought it was very orderly, and I think what they were trying to accomplish as far as having a conversation about general school safety, I think they did a very good job,” Medders said.

“There were no behavior problems. It was really more listening and receiving than talking.”

Medders said Troup High has updated its camera system with 50 or 60 installed cameras and also uses a card reader that gives students access into the school.

“Having these kinds of conversations like we had today, I have no problem with it,” Medders said. “I encourage it. I was very, very impressed with the way our students handled it. Very professional. You couldn’t be prouder of them to handle it in that kind of way.”

LaGrange High School, which has around 1,200 students, had eight students take part in a protest, according to Troup County Schools Public Relations Director Yolanda Stephen. Stephen said there were no incidents at any of the schools.