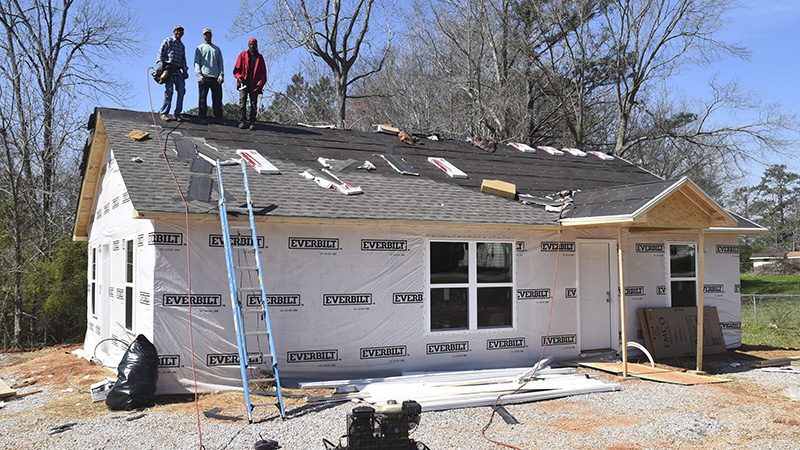 Cecil Ramsey and his crew work on the roof of the home of Elizabeth Brewer for the Chattahoochee Fuller Center Project. Ramsey has been donating his time for the past seven years. -- Steven Thomas

WEST POINT — The Chattahoochee Fuller Center Project got a little help recently with a project from over a dozen students from Ohio.

“They came down here to help for our Block of Blessings on March 21,” she said, noting that 400 students from Point University would be there to paint three homes and the help clean 50 properties in the area.

Everyone was there to work on the home of M.L. Ward at 510 Cleveland Ave.in West Point. The property was built with oriented strand board on the sides, which have rotted as the years passed.

Roberts said the old material was being replaced and siding would then be added. Work began Monday and would be finished around Wednesday.

The addition of the Cleveland students came about after the students made inquiries about working with the Chattahoochee Fuller Center Project.

“I appreciated what they [the Chattahoochee Fuller Center Project ] do for West Point,” he said.

“If I’ve got kids from Ohio coming down, the least I can do is help out a little bit.”

Tramell was out cutting board to be fitted to the home.

“We’ll chip away at it house by house,” he said. “Eventually we’ll get this whole city looking good.”

The fire department will also help out, the mayor said. He added that they planned to burn some old wood around the home during the Block of Blessing event next week.

The project has been working on other homes recently as well.

Cecil Ramsey and his crew were at the home of Elizabeth Brewer last Friday putting on the roof.

“He [Ramsey] has put on roofs for us for the past seven years,” Roberts said, noting the home would be dedicated on March 23.