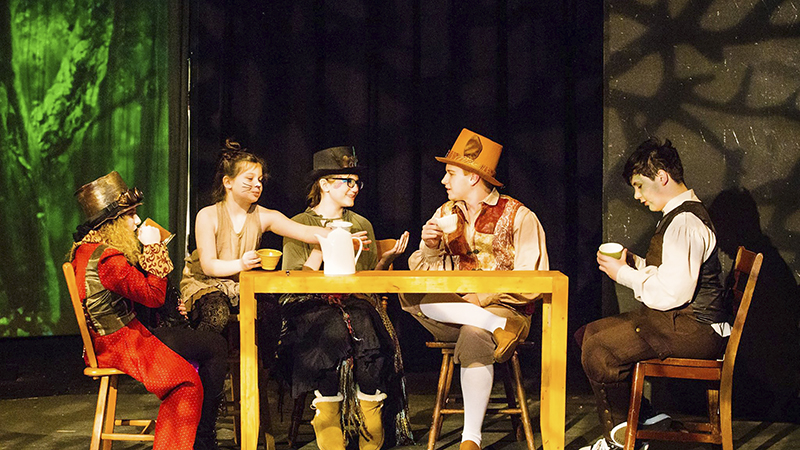 The Lafayette Theatre Academy will be performing “The Last Queen of Wonderland” the next few weeks. The play opened Thursday. --Dede Wilson

The Lafayette Theatre Academy held its opening performance of “The Last Queen of Wonderland” Thursday night and the play will be performed this weekend and next weekend.

The Lewis Carroll inspired story will feature 45 cast members ages 5 to 16-years-old under the direction of Amy McDow. The play feature’s a young woman named Lacie who follows a white rabbit into Wonderland on a quest to find her sister and save a new friend.

The performance will take place at the LaFayette Society for Performing Arts black box theatre and is expected to draw the interest of audiences young and old.

“This is one of the most artistically challenging productions I have experienced,” McDow said. “From original costuming to learning new technology for special effects, we have stayed in a flurry of creativity since the first day we began working. One of the biggest rewards has been seeing the excitement on the faces of this cast as the production has progressed. This is a really fun and unique story that we are all eager to tell.”

The play was written by a midwestern author, who specializes in reimagining old stories.

“One of the great joys of writing plays for young artists is seeing how theater can have a positive impact on their lives, whether they got involved at age 5 or 15,” said Jeremy Sony, the playwright. “Youth arts programs and arts education are awesome things, and these kids are more awesome.”

The young actors will sport steampunk inspired clothing as familiar figures like the Queen of Hearts, the white rabbit and even Lewis Carroll cross the stage in a reimagined form.

“I cannot wait for people to hear the story of Wonderland in such a new and exciting way,” said Sophie McDow, who plays Lacie. “The best part of this, is that I get to tell the story alongside some of my favorite people.”

Seating in the LTC Black Box theatre (in the LSPA building) is picnic style and the doors open one hour prior to show times for guests to enjoy the meals brought with them at their tables. Concessions are also available. Showtimes are at 7 p.m. on March 16, 17, 22, 23 and 24.

There will be a matinee offered on March 18 at 2 p.m., followed by a special tea party with the cast. A sensory-friendly performance will be offered on the 21st at 5 p.m.