Jagoda focuses on depicting dogs, horses and other animals in his works of art 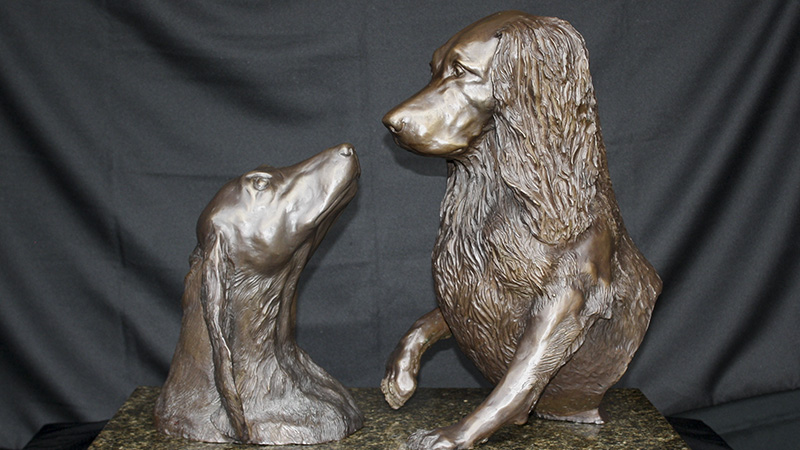 While many artists have one or two favorite mediums to work with, for Len Jagoda, depicting animals using everything from pastels to bronze is his passion.

Jagoda’s studio sits just south of Pine Mountain and gives away his varied projects at a glance.

“Right now, I have up three easels and a sculpture stand, and I have a horse on the sculpture stand,” Jagoda said. “I am reworking a piece that I just felt like I could make it better, an oil, and then I have a pastel on another easel. It is a portrait of a groom in California. On the other easel, I have a very large oil portrait of a horse called Tsiartat.”

Jagoda tends to focus on dogs, horses and other animals in his work, but he is careful to avoid letting his focus rest on any piece for too long.

“I just kind of bounce around from one to another mainly because I don’t like to get too deep into a given piece,” Jagoda said. “Then what happens is you don’t necessarily see flaws, so if you step away from it for a while and go somewhere else, you take that out of sight. When you return to it you’ll see things that you wouldn’t have noticed had you just kept working at the same piece the whole time.”

He said stepping away forces him to look at his own artwork as a whole instead of any one detail.

“I believe in a concept called fresh eyes and re-looking at pieces, so that I don’t get so enamored with the area that I am working on or is part of that piece and don’t see the whole picture,” Jagoda said.

Jagoda said that he has also found that working with other artists improves his work.

“Seeing other artists and what they do helps stimulate ideas for me, and I use other artists that I use in high regard as mentors for me,” Jagoda said. “So, if I had a piece — again, it is the fresh eyes thing — you can have somebody look at it, and they may see things that would make that piece better. I use those friends to help me improve my work, and likewise, I mentor for other artists.”

He tries to support other artists, especially younger artists in return.

“I really try to encourage artists,” Jagoda said. “Sometimes people get frustrated, and I really like to see people think more of their work then sometimes they do. I think that is typically hard on a local market.”

Jagoda is a member of the Visual Artists Alliance of LaGrange and his work has appeared at local art shows as well as shows across the country.