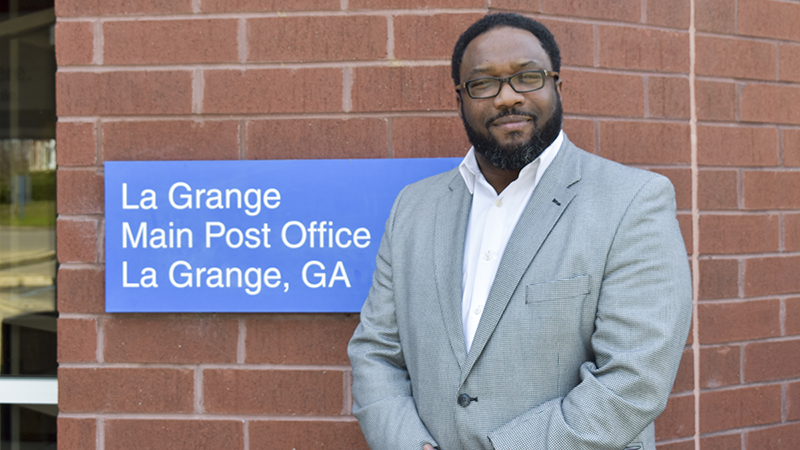 Sandy Strozier is excited to be able make a difference in the community as the LaGrange Post Office’s new postmaster. --Alicia B. Hill

Sandy Strozier became the new postmaster for the LaGrange Post Office in January, and he is beginning to settle into the post office just a few miles away from where he was born and raised.

Strozier has worked for the U.S. Postal Service for 25 years, serving at locations including Rockmart and Columbus. He has been a postmaster for 15 of those years. Now, he is excited to serve LaGrange and spend time with his family near where he grew up.

“I grew up in Greenville — actually in the Odessadale community, which is between Greenville and LaGrange,” Strozier said. “I have family here, so I definitely am glad to be back. It is an honor for me to be the postmaster for LaGrange.”

Strozier played football at Greenville High School before attending the University of West Georgia. That experience gave him the opportunity to get to know the LaGrange community from a young age.

“When I was younger, my grandmother lived on Key Street, and so we played at Calumet Park,” Strozier said. “We would come here during the summers, and we would play Troup and LaGrange [schools] only in junior high. We never played head-to-head in high school. For some reason, they didn’t want to do that, so I knew a lot of the guys growing up.”

He served in the U.S. Army during Desert Shield and Desert Storm before beginning his postal career. Now, he is ready to serve the community that helped shape him during his formative years.

“I am just looking forward to serving the community, getting my feet wet and absolutely managing the growth of LaGrange,” Strozier said. “I was so excited to hear about the new resort that is coming out there, and the growth that is coming. Right here on Lafayette Parkway, I can remember growing up, and this didn’t exist. It was just Highway 109 that ran right through LaGrange, so Lafayette Parkway shows you the growth that LaGrange has had.”

Strozier said he is excited to help organize growth from the ground up for postal delivery in a time when parcel delivery is becoming an increasingly large part of the job. He said he plans to improve the LaGrange Post Office’s cost efficiency while becoming increasingly involved in the community.

“I am a teen minister also, so that is my passion — young folks,” Strozier said. “I certainly want to get the chance to do that. … Anytime I get the chance to talk to a young person, I’m doing it. I do want to be more involved in LaGrange.”

Strozier said he is still involved in a church he served while he was in Atlanta, as well as the church that he grew up in. His mother still lives in the area and his daughter is the vice principal at Callaway High School.

“I am coming here because of family,” Strozier said. “My mother is elderly now, and I want to get back to spending good quality time with her. Being in a larger office, [like Columbus] I did not have as much time. I have had since I’ve been here the opportunity to go out and spend lunch with her. That’s been a treat for me as well as it has been for her.”

Strozier plans to have the LaGrange Post Office host more events for the community including monthly passport fairs.

Business has been good at GLL Outdoors