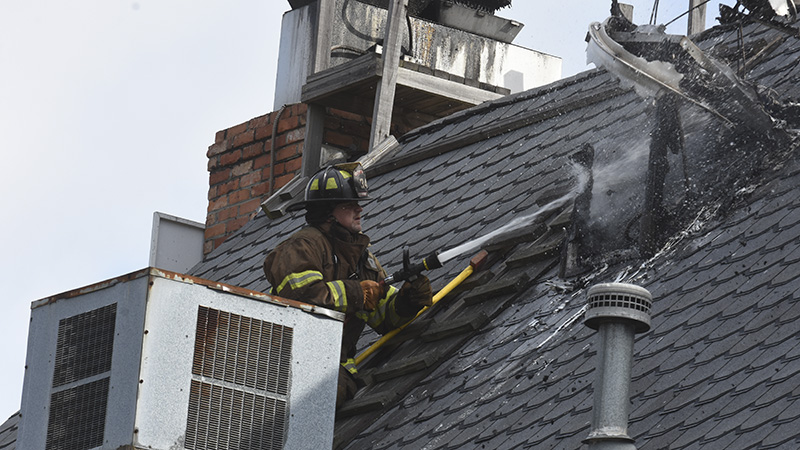 HOGANSVILLE — No one was injured in a fire at Roger’s Pit Cooked Bar-B-Que in Hogansville Wednesday morning, though the amount of damage to the inside of the restaurant was unclear.

The Troup County Fire Department responded to the call of a fire at 9:52 a.m., and it took firefighters about 35-40 minutes to get it under control, according to Lt. Norman Robinson.

“I talked to the owner, and they have a pit where they smoke butts,” Robinson said. “His regular guy wasn’t in, so they had one of the employees to check on it, and they accidentally turned the gas up instead of off. It started from there.”

As of 11 a.m., no assessment had been done on the damage to the inside of the building, Robinson said. The fire is believed to have started in the pit and moved into the building’s attic.
Robinson said there were three employees in the building when the fire started, but all three made it out safely.

“Everybody was able to get out,” said Randy Striblin, owner of Roger’s Bar-B-Que. “They were talking about the flames coming out of the pit and smoke and stuff. The worst thing would’ve been if they had gotten smoke in their lungs and couldn’t have got out. They did the right thing. The fire department told them to get out.”

Striblin said it’s difficult to know how long the business will be closed while repairs are made.

He was unclear how much damage had been done,  but knew the fire had burned a hole in the roof.
Roger’s Bar-B-Que has been in Hogansville since 1999, and Striblin has owned it in 2003. Striblin does not own the other locations with a similar name in Troup County.

“I’ve had a lot of phone calls, and I appreciate the support from a lot of people. The chief of police came over, the mayor came over, the city manager came over … and a lot of other business owners came by to see how they can help,” Striblin said. “We’ll rebuild if that’s what God wants me to do and move on. I enjoy what we do here, and I enjoy serving the community.”