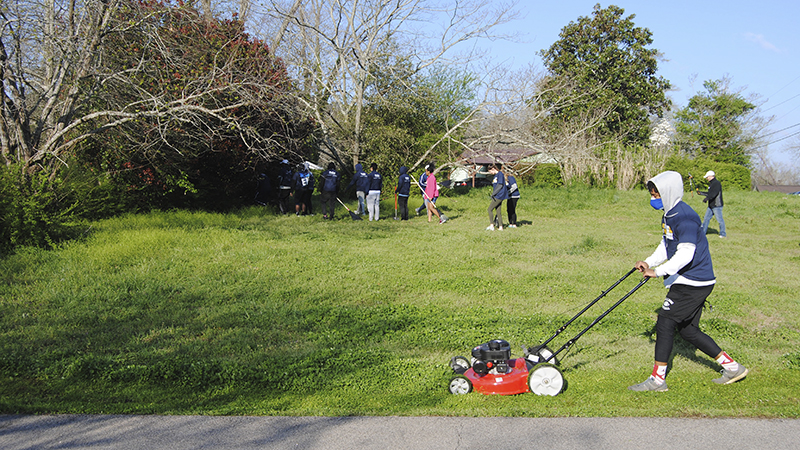 Wednesday was Point University’s Impact Day 2018. Classes were canceled to allow students to do community service. Approximately 350 students spent most of their day cutting grass, weed eating and working in the yards of a West Point neighborhood. --Wayne Clark

WEST POINT — Anyone who was outdoors in West Point in the late morning or early afternoon on Wednesday couldn’t help but hear the roar of lawnmowers, weed eaters and blowers on the east side of the river.  It was the sound of Point University’s Impact Day 2018 and approximately 350 students were in the neighborhood between Plum and Cleveland streets doing yard work at 35 work sites.

They helped clear off some vacant lots, cut the grass, removed underbrush and weeds and painted the exterior of three homes.

There are a lot of elderly residents who live in the neighborhood who can no longer do such work themselves but are very grateful when they received assistance.

“We had people coming out of their homes to thank the work crews for what they were doing,” said Chattahoochee Fuller Center Project Executive Director Kim Roberts. “We had 35 house captains who did great work in directing the students. We really appreciate the volunteers who came out from Interface, Hyundai-Demos, ITC Holding Company and Home Depot of LaGrange. Home Depot and the Fuller Center helped with the equipment. We’d also like to thank West Point Coca-Cola for providing the drinks for lunch.”

Impact Day makes possible a Block of Blessings event for the CFCP.

“We also want to thank Mayor Steve Tramell, (CFCP President) Curt Johnson and (CFCP Board Member) Brad Huguley for being here today. Everything went really well, especially considering the large number of people here. It was well organized. We got a lot of work done today,” Roberts said.

Assistant Dean of Students Illya Lawrence, Marsha Hubbard and Mika Carter of the Point University staff had an important hand in what went on as well.

The neighborhood between Plum and Cleveland was a very busy place between 9 a.m. and 3 p.m.

On Huguley Road in Valley, work is also under way this week at CFCP Home No. 39.

The work is being done by employees of EAMC-Lanier Hospital. Long-time hospital employee Loretta Brewer will be living there when the work is finished.

“They have finished putting up the Hardie board on the outside,” Robert said.

“They are also doing some interior painting this week. Next week they will be putting in the cabinets and the flooring.”

The home will be dedicated a week from Friday.

For Loretta Brewer, it will be Good Friday in more ways than one.