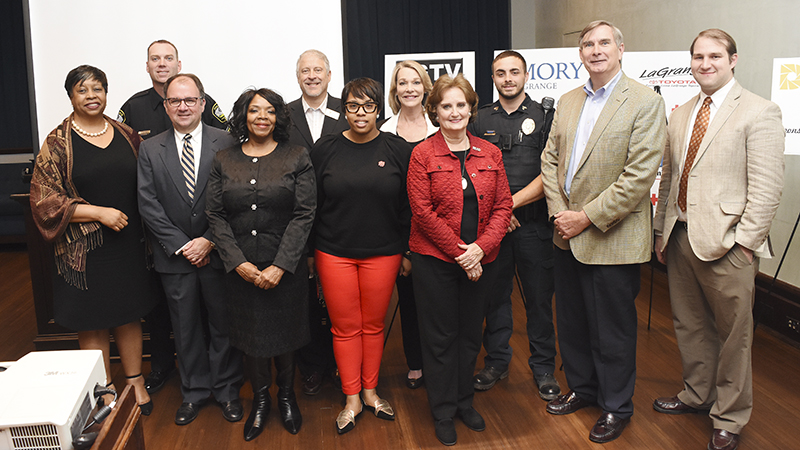 The American Red Cross of Central Midwest Georgia celebrated ten hometown heroes Thursday morning at Del’avant Event Center. The hometown heroes are nominated by the community for their kind acts and their focus on giving back to the people of LaGrange and Troup County.

Burdette might be best known for her role as Mama Jama, where she visits schools and teaches children the importance of reading. She’s been dressing as Mama Jama for 25 years and holds an annual spelling bee each year through the Certified Literate Community Program.

“I’m just really humbled to be considered a hero in my hometown,” Burdette said. “When you’re recognized by people in your hometown, that’s just way beyond anything I ever thought about.”

Ferguson, who previously served as mayor of West Point for eight years, has represented Georgia’s third congressional district for two years. He wasn’t able to be at Thursday’s breakfast, but Greg Panzer, a field representative for his office, accepted the award.

All of the candidates did video interviews, which were shown during the breakfast, and then were given a chance to speak after accepting the award. Ferguson thanked everyone through a second video.

“When I think of a hero, I think of someone who is willing to give of themselves to make their fellow man and their community better than he found it,” Ferguson said. “I think it’s important challenge for us all to always find a way to do more for our fellow man, to help veterans and do more to make our communities a better place to live.”

Jennings is the founder of Bringing the Ages Together, a nonprofit organization. She’s also involved in the Alfred Jennings Free Health and Screenings Clinic.

“I was blown away that doctors will give up their Saturdays and their free time, and that volunteers [do the same] — because it takes a lot of them,” Jennings said. “When people think of heroes, they think as big people and famous people, but a hero can be as simple as helping someone across the street.”

Langford is trustee of the Ray C. Anderson Foundation and founder and president of The Ray. The Ray is an 18-mile length of highway that honors the legacy of Langford’s father, the late Ray C. Anderson. The plan for the highway includes improving safety, beautification projects and reducing pollution.

“We think we can change the world with this project. Even though it’s right here in Georgia, it’s a national effort,” Langford said. “We want other people to follow what we’re doing around the world. It’s a very exciting opportunity to prove you can be sustainable in transportation.”

Three law enforcement officers were recognized. Loubet works for the Hogansville Police Department, McCoy works in the community outreach unit for the LaGrange Police Department and Pressley is an investigator with the Troup County Sheriff’s Office.

Loubet said anyone can be a hero, and that he tries to get to know the people in Hogansville.

“I like to look at myself as a public figure more than most officers,” Loubet said. “I try to get out and be really strong in the community as far as dealing with individuals and stuff like that. I try to help people on a personal basis.”

McCoy also coaches soccer, baseball and football, depending on where the recreation department has a need. He said there are many deserving representatives from the LaGrange Police Department and that he was honored to be chosen.

“There’s men and women down there at that police department right now, they sacrifice their weekends, they sacrifice their holidays,” McCoy said. “They work the night shift. They are willing to give up their lives so somebody else might live and to me that’s the true definition of a hero.”

Pressley wasn’t able to be Thursday’s ceremony due to a prior commitment, but spoke on the video. Jeff Duran with the Troup County Sheriff’s Office accepted the award in his honor.

“It’s just about doing the right thing when you get a chance to do so,” Pressley said. “It was an honor when I heard about the award, and I was very humbled.”

Tucker served 12 years on the LaGrange City Council, but did not run for reelection during the last campaign cycle. Tucker is the First Steps Program Coordinator at WellStar West Georgia Medical Center, which connects families with newborns to community resources.

“My passion is most definitely with women and children, trying to encourage independence, quality of life and just enjoying life,” Tucker said.

Wilson is the operations director at the LaGrange-Troup County Warming Center, which opens during cold weather to help people who find themselves on the streets during freezing temperatures. He’s also served the Boy Scouts of America since 1995 and works at New Ventures.

“So many people are just a heartbeat away from being homeless, and when you sit down and are really with somebody instead of just doing something for someone, you find out that your lives are really not that different and you could easily be where they are,” Wilson said.

Wimbush, the final hero honored, is the founder and director of operations at She’s D.O.P.E., which empowers young women to succeed by helping them earn college scholarships. She used an example from a recent college fair, when a handful of students in the program were offered 19 scholarships totaling $1.6 million dollars. She said the award meant a lot since her mother had just passed away in February. She accepted in honor of her mother, who she said taught her to give.

“You give because it’s the right thing to do,” said a teary-eyed Wimbush. “Not because you are looking for someone to say thank you. You give because someone unfortunate could easily be you any day. You never live your life for just you. You live it for the people who look up to you, who you never knew looked at you and said ‘I want to be like her.’ What I do for those girls is I give to them, so that they can have the opportunity to give to someone else.”

GETTING DOWN TO BUSINESS: Industry leaders announce start of…