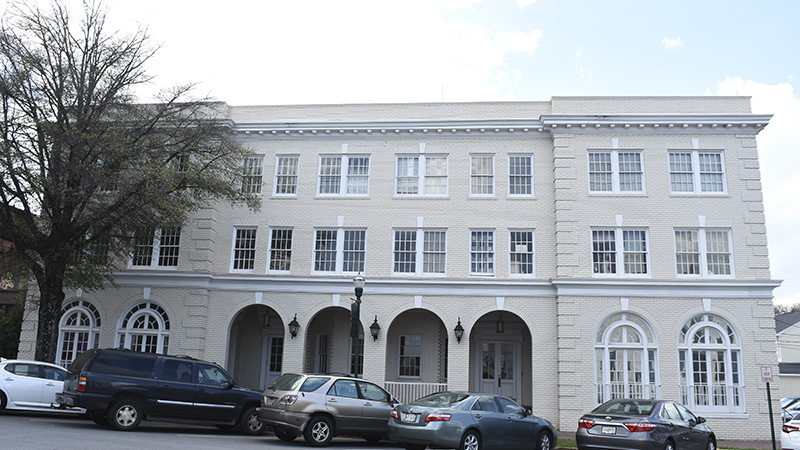 The Colonial building in downtown LaGrange has been sold. --Daniel Evans

The old Colonial Hotel building on Ridley Avenue has officially changed ownership and will undergo renovations.

The building was purchased by Colonial Properties Group LLC for $277,500 from The Salar Partnership, according to Troup County Property records. Dave Knight, a LaGrange native, and Randall Redding, a general contractor, are 50-50 partners in the project. The sale officially went through Feb. 28, according to property records.

Redding and Knight actually backed out of the sale the first time they considered the purchase, but continued to think it over.

“We walked away from it the first time and then we got to thinking. There is something charismatic about that building that has a lot of historical value to it. I’m originally from LaGrange, so I have a real passion for the city and that area since I grew up there. So, it was just a way of trying to preserve that building,” Knight said. “I wanted to make sure nobody bought it and tore it down. I think it has a lot of potential, from our standpoint as an investment, but it also has potential to be an attraction and focal point for the City of LaGrange.”

The hotel was opened in 1925 and has a long history in LaGrange, according to county historian Clark Johnson. It is the place where the civic clubs used to meet, and it hosted Franklin D. Roosevelt in 1929, back when the future president was still the governor of New York.

It stopped operating as a hotel in September 1967 and was turned into apartments in 1968, Johnson said. Since then the building has housed many tenants and there are several still in the building. Knight said it’s important that they work with current tenants before deciding any future plans.

“First of all, we want [to make sure] the tenants that are in it now are protected. We will take care of them. That’s our first priority. We don’t want them to panic and think that they are going to have to find another location,” Knight said. “We don’t want that. We want to treat them fairly.”

Knight said they are discussing three different ideas, but have not decided on a path forward at this point. When Redding and Knight toured the three story building in February after the paperwork was signed, Redding discussed using part of the bottom floor for a possible retail space and coffee shop.

“I love what’s going on around the square and around downtown LaGrange. I know they are trying to create a pedestrian-friendly type downtown area, and they are doing a great job with that with the amphitheater and other restaurants right on the square,” Redding said. “And this is only a block off the square, so I think it’s going to be a great place for people to conduct business. It’s a wonderful location and beautiful property.”

The property is located at 119 Ridley Avenue, across from the Troup County Government Center.