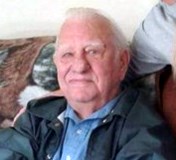 The Alabama Million Dollar Heavenly Band has another baritone player. Julius Dale Blankenship, better known as Dale, has gone to share war stories with his idol Paul “Bear” Bryant. Anyone who knew Dale understood that he was a true ‘Bama fan. He even took his children to a church in Alabama where the ‘Bama fans sat on the right-hand side and those from Auburn sat on the left.

Dale graduated from the University of Alabama with a master’s degree in electrical engineering. He always enjoyed building things and tinkering. He was frequently the one trying to find a better, cheaper way of doing construction projects. His career took him from vacuum salesman to corporate executive, with a brief stint in the U.S. Army, 101st Airborn Division as a paratrooper.

But not only was he a fan of the Crimson Tide, he also was a true patriot. He loved this country and was frequently brought to tears upon hearing the “Battle Hymn of the Republic.” Many late nights would find him in his recliner watching old black and white war movies.

He also loved beautiful women. In fact, he married three of them. The last one “took.” Carolyn was the true love of his life, and he never got over losing her two months ago. Their love was the real deal.

He joins Carolyn in the hereafter with his parents, Polly and Happy, his baby brother, Paul, and his infant daughter, Catherine Ann. Dale is survived by his brothers, Don, Wiley and Joe; his sisters, Shirley, Nell and Wanda; his children, Sandy and Dale; his grandchildren, Cortney Lee, Casey Ann, Mary Catherine and Cory Dale; and his faithful dog, Max.