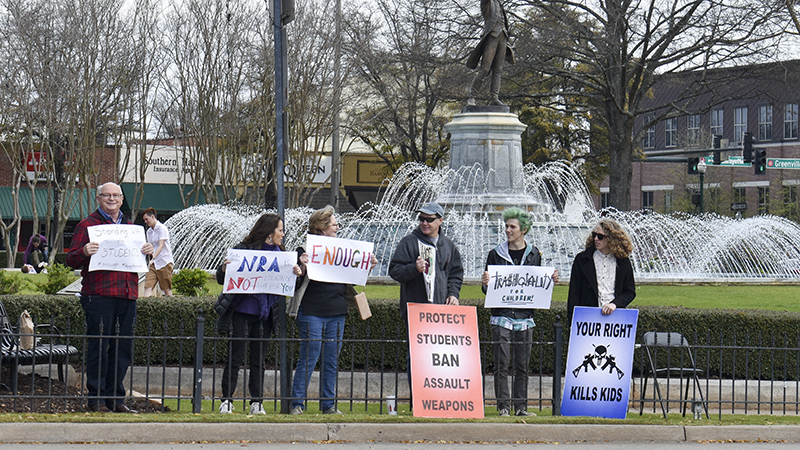 As “March for our Lives” protests took place in cities across the country on Saturday, a small group of about a dozen protesters stood on Lafayette Square with a similar message.

The group was made up of retired teachers, college students and other community members who wanted to make their concerns for gun violence known.

“We are out here to support the students of Parkland at [Marjory Stoneman] Douglas High School who are in Washington D.C. today,” said JoAnn Griffin, a retired teacher who organized the protest. “We wanted our county to be a part of that, and that is why we are here.”

Griffin said the protest was not advertised in advance out of concern for retaliation. During the protest drivers expressed their opinions as they drove by, some with smiles and waves, while others voiced their disagreement.

“Here, I feel like there is a lot of opposition for this kind of protest,” said Jory Marshall. “For other people to see that there are people behind this cause [is important].”

For the small group, the entire purpose of the protest was to let people know that there are people in LaGrange who are worried about gun violence in schools.

“I couldn’t sit there and cry any longer and be angry, and I told my husband, ‘Steve,’ — I taught school for 34 years — ‘I’m going to go stand up for those kids on the square,’” Griffin said. “So, I started calling people, and they said they would be interested.”

Griffin said she spent the majority of her teaching career at Troup High School, and while teaching her biggest concern was drunk drivers. Due to national events, that concern shifted though, and for some of the protesters, the conversation will stretch beyond Saturday’s demonstration.

“My son in college has repeatedly asked me to please write to the governor and to not allow guns on college campuses,” said Susan Marshall, a protester.