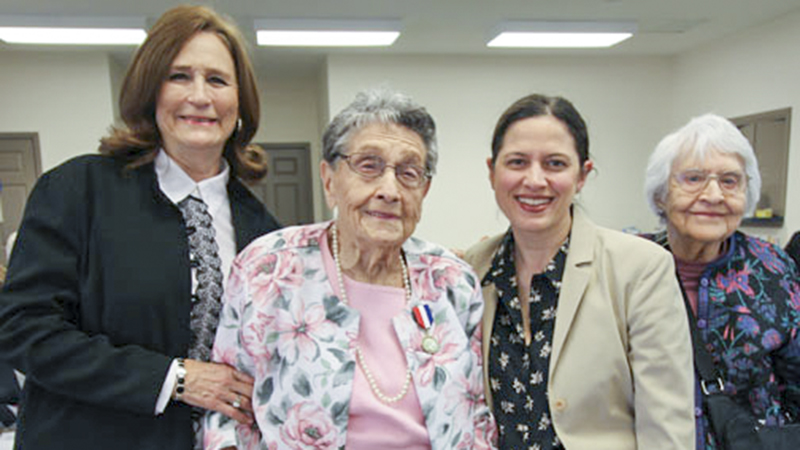 DAR chapters are encouraged to select notable women from their state or community to honor with this award which emphasizes the role of women — past and present — in American history. Women chosen for this recognition are women who have made a contribution or a difference in their communities. They are, or have been, intellectual, educational, social, religious, political, scientific or cultural innovators.

Both ladies were born in Heard County and can trace their roots back to the 1600s. They both became very interested in genealogy after their children were grown and they had time to devote to it.

Craft was a driving force in the continuing development of the Heard County Historical Center and Museum. She began working at the museum in 1992, and during her 12 years, the library and museum artifacts increased greatly. Her vast knowledge of Heard County and the families who settled here along with her willingness to help sparked the genealogy bug in others. She was always there to help anyone with their research and still remembers most of it today.

Craft joined the Daughters of the American Revolution chapter in LaGrange. When several local ladies suggested that there needed to be a DAR chapter in Franklin, Craft agreed and started recruiting new members and researching ancestors. She was on a mission to find enough ladies in Heard County to make a chapter, and on Sept. 9, 2000, the James Stewart Chapter DAR was chartered with Craft as the organizing regent.

Craft has been quite involved with the organization of many lineage and held many positions not only in the James Stewart Chapter NSDAR, but also in the Heard County Historical Society, Heard County Chapter 2587 United Daughters of the Confederacy, the William Wofford Chapter Colonial Dames XVII Century and the National Society Magna Charta Dames and Barons.

She has served Mt. Zion Methodist Church as secretary, treasurer for over 50 years.  She is always there for any one in need, shown by her support of the Heard County Food Pantry, the sheriff’s Christmas toy drive, the local schools and the DAR schools and the Georgia DAR’s Meadow Garden Museum, the home of George Walton — one of Georgia’s signers of the Declaration of Independence.

Crockett has been active in the “Red Hat Society.” Crockett’s continued support of her community and its needs has made her a leader in her community.

The James Stewart Chapter NSDAR said it is pleased to add Crockett and Craft to the national Women in American History book at the DAR library in Washington, D.C.

The Daughters of the American Revolution, founded in 1890 and headquartered in Washington, D.C., is a non-profit, non-political volunteer women’s service organization dedicated to promoting patriotism, preserving American history, and securing America’s future through better education for children.

Any woman 18 years or older-regardless of race, religion, or ethnic background-who can prove lineal descent from a patriot of the American Revolution, is eligible for membership. Please contact us at jamesstewartchapterdar@gmail.com or go to dar.org