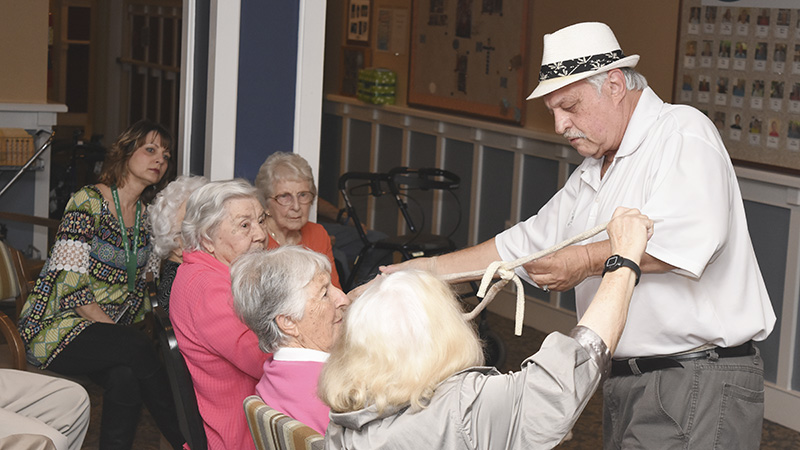 Lawski performed card tricks and made items disappear during a one-hour show that kept the audience of about 20 people laughing. He made a $1 bill disappear then reappear inside of a lemon. He also worked just about every person in the audience into the show in one way or another.

Lawski currently lives in Hilton Head, South Carolina but makes the five-hour drive to LaGrange every other week. He also performs in Lanett and Columbus.

Lawski’s been performing in LaGrange for about a year, and he does shows for all kinds of different groups of people. He said he’s done shows at several retirement communities in the area.

“They need to be entertained too,” Lawski said. “They are always a great group.”

Life hasn’t always been easy for Lawski though. At one time his stage act was booked for shows all around the country, but he fell and hurt his shoulder. He lost his range of motion and had to change his act.

“I had to cancel my stage act. I was booked in San Diego, Palm Springs. I had to cancel and retire that act,” Lawski said. “That’s when I did a lot of praying. [I asked] how am I going to feed my family now? The Lord answered me by inspiring me to do Jesus in your pocket.”

Lawski performed the “Jesus in Your Pocket” trick to begin his show. The trick ends with the person picking the card with Jesus on it.

“They always wind up picking Jesus. It’s a good way for them to promote the Lord through a card trick, so that’s my mission in LaGrange,” he said.

Lawski said he shows the trick to prisoners so that when they get back to everyday life they’ll be led by faith.

“There’s no place I can go where they are having Bible study, and I say ‘hey kids, want to see a card trick?’ Then, I have a table full of kids,” he said. “It’s a great way to introduce the Lord through a card trick.”