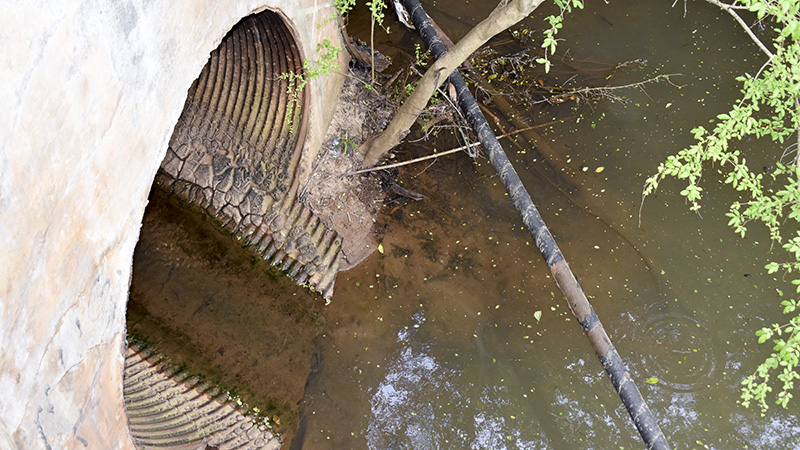 Park Creek on Fourth Avenue is one of several storm water systems discussed by the LaGrange City Council that need repair.

The City of LaGrange plans to work on solutions to storm water concerns in different parts of the city.

During the LaGrange City Council’s annual retreat, discussion turned to repairs that need to be made to ensure that the system remains adequate for years to come. The council looked at storm water system repairs on Moore’s Hill, Fourth Avenue, Lakewood, Daniel Street and Motley Street. The retention pond behind Kroger was also considered for improvement.

“Some of those things are for people’s livelihood because if you don’t repair that thing at Moore’s Hill, that is going to cause people to not be able to get to their home in and out,” Council member Willie Edmondson said. “That is awful. That is project number one. Those other ones with pipes coming out, as we’ve had so many of those roads to erode and collapse. That to me is very important. That should be a priority.”

No action was taken by the council during the retreat, but City Manager Meg Kelsey indicated that city staff would work to make the necessary repairs starting with high priority areas using Special Purpose Local Option Sales Tax funds. Mayor Jim Thornton pointed out that there was some funding for some of the less expensive repairs in the budget to start on repairs before the new SPLOST year begins in January.

“I have hoped that as The Thread was going through, that there might be some opportunities to plan in some stream bank improvement, beautification and add some more ponds, water features and things like that as part of that Thread project,” Thornton said. “But, that is a little bit removed from what The Thread itself does, but it might be that we can use a little bit of Thread money for beautification and a little bit of storm water money to do some stream bank [improvement] if that is what your thought process is.”