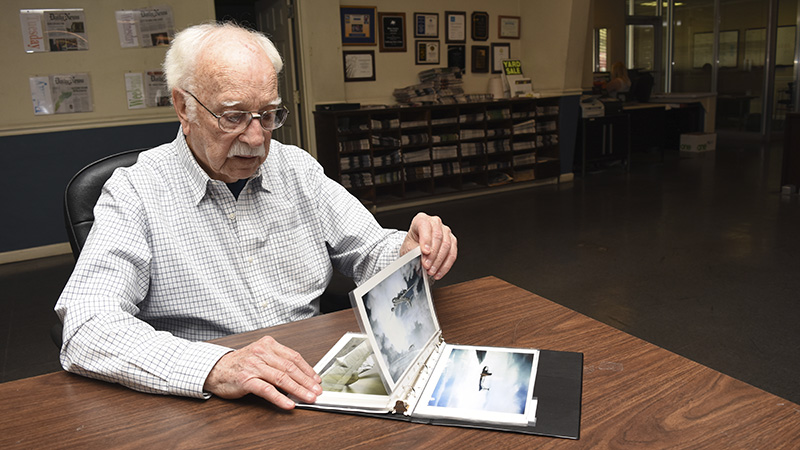 Guy Longshore looks through a book of photos that he took while serving in the U.S. Army Air Corps during World War II.

Before he went into the U.S. Army Air Corps as a teenager, Guy Longshore was just a young man on a date at a movie theater in his hometown of Montgomery, Alabama. He happened to be sitting in the lucky seat that night, which meant he won a big prize — $12.

After the movie, he walked next door to the grocery store and saw an Argus camera for $12. He tried to buy his girlfriend ice cream instead, but she wasn’t interested.

After more than 70 years, the now 95-year-old Longshore is thankful he ended up buying that camera. It went everywhere with him during his service in World War II, and the photos he took with it are now part of the Smithsonian National Air and Space Museum and the World War II Museum in New Orleans, as well as many other museums.

The color pictures he took of the B-29 Superfortress in action are believed to be among the very few in existence.

“When we were stationed at different bases, I took pictures of pilots standing in front of the airplanes,” Longshore said. “There was a big sign there that said no photographs, no cameras. I broke the rules.”

Historians are thankful he did, because the photos are a link to the past and feature images from the war that would’ve otherwise been lost forever.

Longshore was a command gunner on a B-29 Superfortress stationed in Guam and Saipan during World War II.

Only one other member of Longshore’s 11-man flight crew is still alive. Through the years, he’s tried to stay in contact with as many of those men as possible, but time — and the busyness of life — can make that difficult.

That’s why Longshore’s photos are such a treasure. They take people back to World War II, and he’s got a story for almost every photo too.

One of his all-time favorites shows a B-29 flying toward Mt. Fujiyama in Japan.

“I didn’t plan on taking that picture. [Mt. Fujiyama] is about 50 to 100 miles west of Tokyo, and we go there to make a right turn to go to Tokyo to drop bombs. We made a right turn heading toward to Tokyo, and for some reason I looked out and saw that,” Longshore said. “My camera was in my bag at the other end of the airplane, and I went in there and got my camera real quick. To me, it’s one of my favorite pictures because you’re getting the whole airplane in there.”

He developed the photos after the war, and on a whim sent them to various museums, not expecting much. Longshore doesn’t want any recognition for taking the photos, only hoping that they help document a historic time in our nation’s history.

The photos were a rarity, however. Longshore said the Smithsonian told him those were possibly the only photos of the B-29 in action during the war.

The B-29 was one of the largest operational aircrafts during World War II and is remembered for carrying out the mission to drop bombs on Hiroshima and Nagasaki at the end of the war. Its technology was considered state of the art at the time because of a pressurized cabin, improved landing gear and a computer-controlled system that directed four gun turrets.

Longshore was involved in several missions in the B-29, but none stand out more than dropping supplies to men in a prisoner of war camp in Sakata, Japan because it was clear how much the delivery meant to them.

“The high point of my whole military career was dropping supplies to the POWs. It was fun flying the airplanes, gunner school, but the high point of the whole thing was when we opened the bomb bay doors and dropped the supplies,” Longshore said. “We saw the men standing out there with no clothes on, waving at us. They had nothing to eat or drink.”

Longshore said the plane flew back by a few days later, and the POWs had written out “Thanks 300 men” as a way to express gratitude for the delivery.

Longshore also had a chance to see Japan after the war, a memory he wrote about in his unpublished memoir.

“It was not until the war was over, and we were returning from a weather mission to Vladivostok (USSR) that I actually saw Japan at a low altitude and in daylight,” Longshore wrote. “It was a total shock seeing the miles and miles of destruction caused by our bombs and the bombs of other B-29s.”

After the war, Longshore moved to Atlanta to work for his father’s company and worked a myriad of jobs before moving to LaGrange over 30 years ago. He’s written most of his life and war stories down, but he remembers all of them almost like they just took place.

Looking back, he wishes he would’ve spent more of his working days in the military and wishes other young people would consider the armed forces when making career decisions.

“What I tell young people these days when I see them on the streets not doing anything with their lives is, ‘why don’t you get into the service?’” Longshore said. “Not only will you see other people, but you’ll see the world. I think of the cities I’ve been to in the United States, like Albuquerque and Denver. I never would’ve seen those places if I hadn’t gone in the service.”

Of course, he’d probably recommend they buy a camera first.

An opening that is packaged to deliver