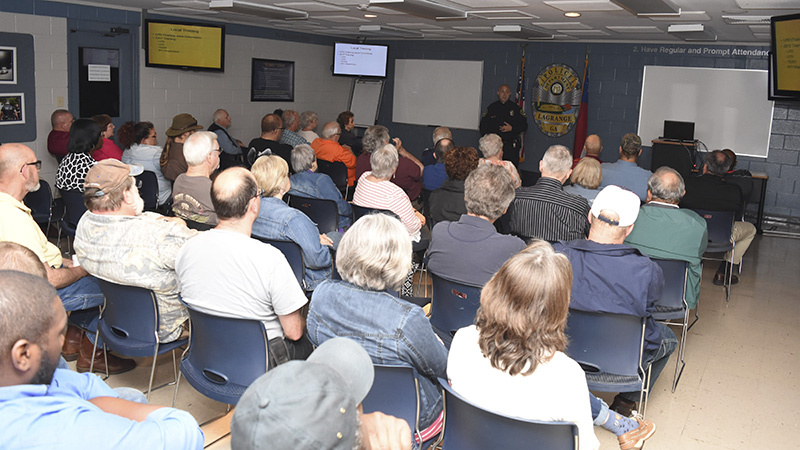 About 50 people attended the training and 65 had registered to take part, which was well above the normal class size of 30.

The LPD held C.R.A.S.E. training, or Civilian Response to Active Shooter Event. It taught people how to handle an active shooter situation using the tactics of avoid, deny and defend, the method encouraged by the Advanced Law Enforcement Rapid Response Training (ALERRT) program.

Lt. Eric Lohr, who led the training with Officer Jim Davison, said the first key to have a survivor mindset.

“Understand that the majority of people that are in an active shooter event survive,” Lohr said. “If you have that mindset and that mentality, it’ll make it that much easier to survive.”

The course discussed the amount of time most active shooter events usually take. Most are over in less than five minutes, meaning the impact law enforcement can have may be limited.

Lohr discussed data from a FBI study that showed six out of 10 active shooter events were over before law enforcement arrived, even though police were on the scene in an average of three minutes.

Lohr also discussed how law enforcement has changed its approach to active shooter training, starting with the Columbine High incident in 1999. At that time, officers were directed to create a perimeter and to wait for the SWAT team to arrive on the scene.

“We learned from Columbine in 1999 that SWAT was not the answer,” Lohr said.

Lohr said after Columbine that policy was changed nationwide, including at the LaGrange Police Department. The LPD has student resource officers at Troup High School, LaGrange High School and Gardner Newman Middle School, and Lohr said they are trained to respond quickly to threats at those schools. Other law enforcement agencies cover schools outside of LaGrange’s city limits.

“If there was an active event at one of those schools, those officers would become a team of one,” Lohr said. “They would be expected, and they are trained to be able to deal with that threat by themselves.”

The class also taught people to be aware and not to discount suspicious sounds.

The two-hour class is held at least once a year by the LPD.

The LPD also handles requests for the training from local businesses, churches and other organizations throughout the year.