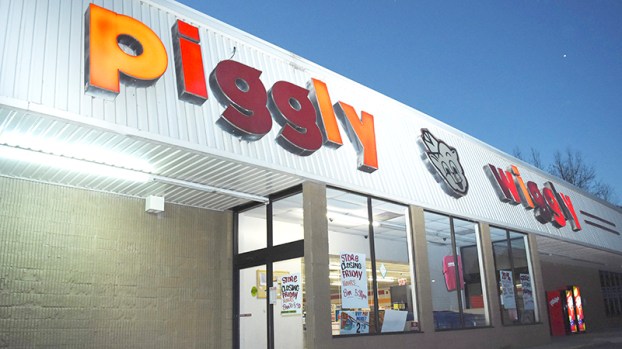 Piggly Wiggly in Hogansville is closing on Friday. --Daniel Evans

Piggly Wiggly in Hogansville is closing

HOGANSVILLE — Piggly Wiggly in Hogansville is closing its doors on Friday, according to Rockdale Grocery President Scott Lewis.

The closing was announced to customers and city leaders Monday. A sign was posted outside the store’s location on Highway 29 and signage on the store indicated that it would be closing at the end of the week. The poster along the highway says “Piggly Wiggly is closing. Thank you for your years of support.”

Lewis said Piggly Wiggly has been in Hogansville since 1993 and became part of Rockdale Grocery in 2004. He said the decision was not an easy one, but the store is not making a profit.

“A business isn’t in business to lose money and at some point you have to make a decision to cut your losses,” Lewis said.

Between 16 and 20 employees work at the store, Lewis said. They were notified of the closing on Monday.

“We are planning to relocate a number of people, to be determined based on their willingness and the flexibility of other individuals to also transfer,” Lewis said.

Lewis said the shopping center is owned by the family that owns Rockdale Grocery, and he said the plan is to “repurpose the facility.” Lewis said he had no details on what the repurposing plans were. Troup County Property Records list KRJ Center LLC and Dorchester Corporation as the owners of 208 North U.S. 29, where Piggly Wiggly is located.

Lewis has personal ties to the location, since the Hogansville Piggly Wiggly was his first job as store manager.

“It’s the first store I ever managed outside of being a co-manager at the store in Franklin, so I will miss it greatly,” Lewis said. “It was my first stepping stone. I’ve got personal ties that run deep, and it kind of hurts to be honest. Just being blunt. It is what it is, but at some point you have to make a decision in the best interest of the company. [That] was to pursue other opportunities with that facility other than operating the store there.”

The closure was discussed during City Manager David Milliron’s report during Monday night’s meeting.  Mayor Bill Stankiewicz said the city was notified of the closure Monday.

“It’s very difficult,” Stankiewicz said. “That store supports members of our community who don’t have a lot of transportation.”

Stankiewicz said he contacted the LaGrange-Troup County Chamber of Commerce, which has Retail Strategies, a retail recruitment company on retainer, to figure out future plans for a store in Hogansville.

“I wish we had more notice. We didn’t,” Stankiewicz said after Monday night’s city council meeting. “I found out this morning when I ran into an employee who was notified he was out of a job. They notified the employees this morning.”