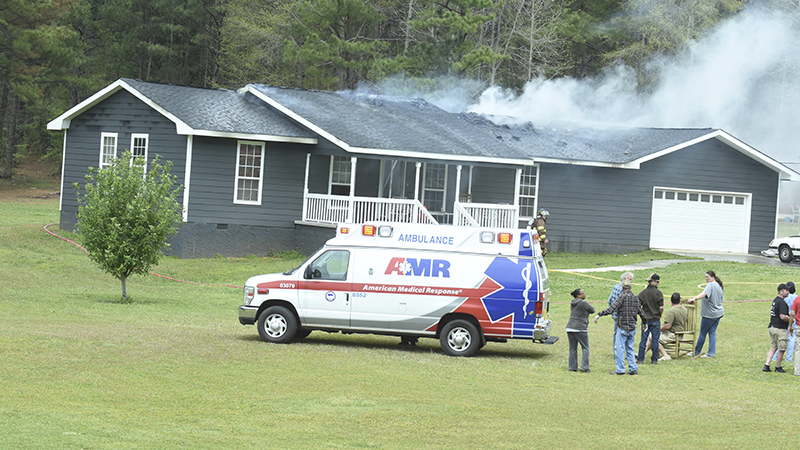 A house fire on Hines Road caused extensive damage to the structure. The Troup County Fire Department, Troup County Sheriff’s Office and AMR were all on the scene. --Daniel Evans

No one was injured Wednesday afternoon in a house fire on Hines Road, but the inside of the residence appeared to be gutted from fire, smoke and water damage.

Homeowner Donald Coe was out running errands when his brother, Sammy Coe, who lives next door, called to tell him that his house was on fire. At that point, flames could be seen from the roof of the house and smoke was filling the sky.

“I was leaving a client’s house, and I happened to ride by,” said Whitney Rosser, who made the initial call to 911 at just after 2 p.m. “I said ‘it looks like their roof is on fire, let me stop just to see,’ and I saw smoke coming from a vent on the outside. I ran up to the house and started beating on the door and screaming on the window to make sure nobody was inside.”

Another neighbor told Rosser that Sammy lived next door and she ran over to tell him. He went into the house, trying to make sure nobody was home.

Rosser ended up helping him get out of the house.

“I thought he was home, so I came out of my backdoor to come down here. I opened up the back door and went in,” Sammy said. “I’ve got a bad heart and the smoke got me. That’s when she got me out. I don’t know how she picked me up. I was down on my knees. She’s definitely a lifesaver.”

Troup County Fire Department Battalion Chief Gene Hogg said there was “extensive damage” to the inside of the building. Hogg said the structure was about 30 percent damaged and there was smoke and water damage to much of the rest of the house.

The cause of the fire had not yet been determined, but Hogg said the fire got into the attic. A portion of the roof of the house was destroyed. As firefighters put out hot spots, and they gave back pictures and other items that were salvageable.

“You just can’t replace memories,” Donald said. “I had two pictures of my mom and my dad in there. They passed away a long time ago and those were the only two pictures we had of them. I just hope those didn’t get burnt.”

Donald’s parents had originally built the house in the early 1980s, and he moved into the home in 2008. Over the last few years, he replaced the roof, remodeled the inside and added a second bathroom.

“I’ve done a lot of work on this house over the years, trying to fix it the way I wanted it fixed,” Donald said.

Donald said he lived in the house with a brother and his son. He said he asks the community to keep his family in their thoughts.