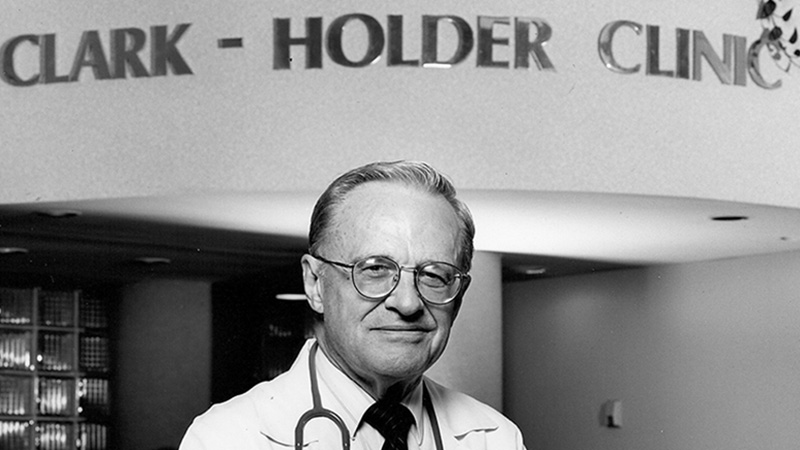 Dr. William Fackler passed away on Friday at age 98. --Contributed

Fackler and his wife, Mardrie, moved to LaGrange in 1950 so that he could start his practice at Clark-Holder Clinic, where he worked until retirement in the late 1990s. He regularly worked long hours at the hospital, often staying until the wee hours of the morning with patients.

“He was unselfish in his service and in character. He was willing to go beyond and above to do anything for anybody and help people,” said retired surgeon Bill Ayers, who worked with Fackler for 39 years, but knew him for much longer. “He spent many nights in ICU holding somebody’s hand. That was not an unusual thing to see him in a room with a patient at three or four o’ clock in the morning.”

According to an archived story from The LaGrange Daily News, Fackler graduated from Emory University in 1941. Three years later the U.S. Army helped him quickly graduate from Emory Medical School. After the Pearl Harbor attack in 1941, the army had inducted the entire school class and put students in year-round classes. Following the war and an internship at Grady Hospital, Fackler joined the staff of the VA Hospital. After three years, he decided to go back to school and pursue a specialty — cardiology — and in 1950 started the LaGrange Heart Clinic.

“He was the ultimate all-time doctor,” said Richard Freeman, who works as a radiation oncologist for WellStar Medical Group. “He saw you in the office and then came to see you in the hospital. He took care of you all the time.”

Fackler turned down a prestigious job in Atlanta a short time later, according to the archived  LDN story. His wife, Mardrie, heard him say then that “It’s taken just a year for me to know that LaGrange is home.”

And the Facklers made it home — and then some — becoming prominent community members who had a hand in various service clubs.

“He was a leader. He never missed a project up until the last year. He was always at all of our projects,” said Ken Young, president of the Lions Club. “He was highly, highly respected and his opinion mattered. He was just a good man. Just a very, very good man.”

He always played a big role in the club’s annual barbecue fundraiser and golf tournament. Ayers said golf was one of Fackler’s favorite pastimes, so much so that he’d seen him on the course within the last year.

But Fackler wasn’t your everyday golfer. Instead of a bag full of clubs, he played with only a driver, 7-iron and putter, Ayers said.

“That’s all he used, but don’t bet him on the first tee because you’re going to lose,” Ayers said with a laugh. “He was just like that. He was a real competitor, no matter what he did and no matter what his age was.”

Fackler also served on the board of the LaGrange Memorial Library for 54 years, retiring in 2008. After 25 years on the board, library officials decided to name their meeting room after Fackler. Little did they know that he would serve another 29 years before saying it was “time to find new spokes for the wheel.”

“Dr. Fackler was more than a gem in our community, he was the backbone of our area’s public library services,” said Keith Schuermann, regional director of the Troup-Harris Library System. “For over five decades he served as a most valued library trustee, and his leadership, guidance and dedication to the Troup-Harris Library System was beyond compare.”

Fackler asked Freeman to take his spot on the library board after he retired. Freeman accepted, but knew he had big shoes to fill.

Troup County Historian Clark Johnson said Fackler was president of the Georgia Heart Association in the 1960s. According to the archives, Fackler was the first Georgian to receive the American Heart Association’s Time, Feeling and Focus Award. He worked as chairman of the board of stewards at First United Methodist Church and taught Sunday School. Fackler also served as vice president of the Chattahoochee Council of the Boy Scouts of America and was awarded a Silver Beaver Award, a distinguished service award given to scouts who have made an impact on the lives of youth. After retirement, he served on a board of local physicians focused on helping cancer patients.

“He had this lifelong interest in learning and reading,” Freeman said. “He continued to read medical journals and was very inquisitive.”

His impact was felt in education as well.

He was named an honorary alum of LaGrange College in 2015, and the Facklers had established the Laura Turner Fackler Scholarship in honor of their daughter, who had graduated from the college. At LaGrange College, Fackler was also a fellow and a member of the Friends of the Library, the President’s Advisory Council, Quadrangle Society and the Leadership Council.

Friends say all of the accolades are a reminder that his passion throughout his life was helping people, whether that was in the hospital or through community service.  When he started his medical practice in 1950, house calls were $5, there wasn’t yet a polio vaccine and penicillin wasn’t as widely available as it is today, but he worked through changing times, always keeping his patients first.

“What a classy, classy gentleman,” Ayers said. “If the world was full of people [like him], it would be a better place.”

Funeral arrangements will be announced by Striffler-Hamby Mortuary.