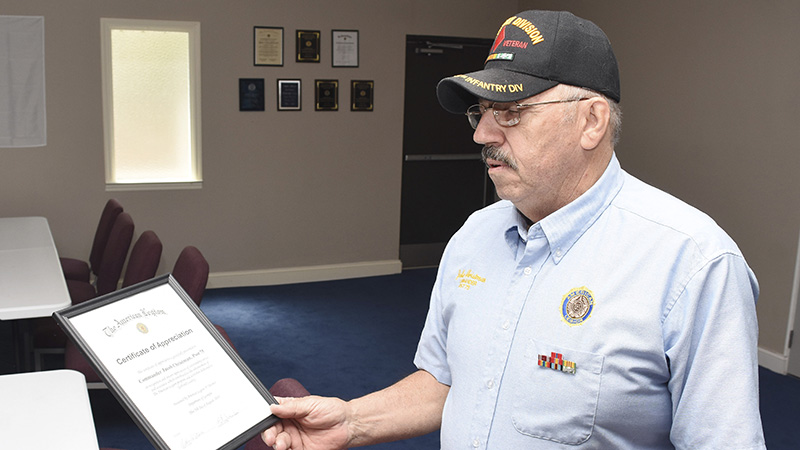 American Legion Post 75 Commander Jake Christman talks about a certificate of recognition he received from the district commander. --Daniel Evans

About a month ago, Jake Christman was spending the day with family when he got a call from a number he didn’t recognize.

Not that it mattered. As commander of American Legion Post 75 in LaGrange, Christman always answers.

It was a local pastor, who had a veteran at his church that needed some help. The veteran had just traveled in from Texas and needed a place to stay and some food for the weekend.

“I told my wife, ‘y’all just go ahead and eat.’ I went over and picked him up,” Christman said.

The American Legion arranged for the veteran to spend two nights at a hotel in LaGrange and also gave him a little spending cash.

“My feeling is if you served your country, then your country needs to help you if you need help,” Christman said.

He’s retired now, but Christman knows what life can be like for a veteran. That’s why helping veterans is one of his biggest passions.

Christman is a 14-year U.S. Army veteran. He received a draft notice in November of 1969 and decided to enlist in the Army, believing it was the best option.

“Everyone told me, if you enlist in the army you won’t be an infantryman and you won’t go to Vietnam. That was a big lie,” he said with a laugh.

He was trained as a mechanic and served in a recovery tank battalion during two deployments to Vietnam.

He remembers how he was treated after returning from Vietnam.

“When I got back after the first year, we landed at Washington state. I got off the plane at the back of the airport, and along a fence there’s people standing there throwing stuff at us,” Christman said. “I guess because of that, I want to make sure that veterans get taken care of.”

Not long after getting out of the military — and a short stint in the National Guard — he had a stroke, and it changed his outlook on life.

“That changed my life because I was in intensive care for two weeks,” Christman said. “For the first week, I couldn’t do anything except move my head. I couldn’t talk and that really scared me.”

Christman said at that point he started taking care of himself, including eating right and cutting back on alcohol. Not long after the stroke, he got a job driving tractor trailers, a career where he spent the majority of the next three decades.

That changed four years ago when doctors told him he could no longer work due to numerous health problems.

A short time later, he took over as commander of the American Legion.

“This is like a full-time job. It doesn’t have to be but I’m the type of person that if I’m going to do something, I’m going to do it to the best of my abilities, the way it is supposed to be done,” Christman said. “I feel that if I there’s nobody here, how can you help veterans? And that’s our No. 1 goal, is helping veterans when they need help.”

The first thing he did when post 75 moved into its current building on Jenkins Street was put up an emergency note, so that if a veteran needs help, it’ll be easy to reach him.

“If someone has an emergency, my name and phone number is on there,” Christman said.

Before moving to its location on Jenkins Street, Christman said around five people would show up to each meeting. Now, he said post 75 averages between 25 to 30 members a month, and an auxiliary was just started.

Christman said post 75 also plans to start a branch of the Sons of the American Legion.