Restaurants get creative with grilled cheese during first year festival 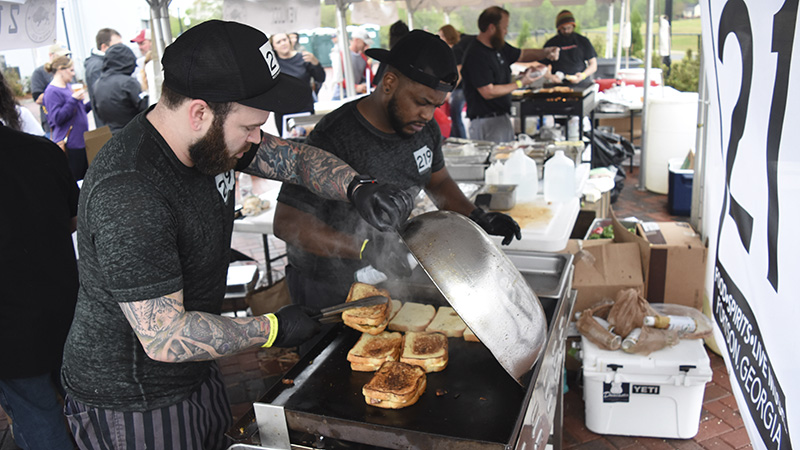 Sam Schiffman and Che Standifer of 219 Food and Spirits flip over grilled cheese sandwiches during Saturday’s festival. 219 won the critics choice award in the competition.

The country will celebrate one of the nation’s most loved sandwiches Thursday on Grilled Cheese Sandwich Day. Hundreds of people celebrated a few days early at Wild Leap Brew Co. Saturday, where even a rainy afternoon didn’t put a damper on the first-year festival.

The event was called the Wild Leap Grilled Cheese Showdown, and the six vendors who participated took it seriously.

Although there were traditional grilled cheese sandwiches offered, each of the businesses also had their own special combination as well.

There was truly something for everyone.

“I think it’s awesome. If it does become an annual thing, then I think that’s pretty darn cool,” said Devin White with Mare Sol. “LaGrange has brought a few new festivals, and they’ve all been a big hit. Stuff like this gives people interaction, gives exposure to certain businesses, especially the newer businesses. They get to showcase what they have to offer, and it might be a little different than everybody else.”

Dexter Jones came up with the recipes for the two sandwiches Kimble’s Food by Design had available. Kimble’s employees got to taste them first, and they got a thumbs up from everyone.

“We tested it with our employees and they liked both sandwiches, so we didn’t go any further,” Jones said.

Mare Sol won the people’s choice award and 219 Food and Spirits won the critics’ choice, and each went home with a trophy topped with a grilled cheese.

There were about 800 people at Saturday’s event and organizers were happy with the turnout — especially given the weather. The brewery opened up the brewhouse so that people had a place to go when it rained, and there was live music and plenty of room to hang out.

“We always want to try to create new, fun and diverse events to get folks to LaGrange and to experience the brewery and the rest of the town, so this is what we’d consider a success,” said Rob Goldstein, co-owner of Wild Leap Brew Co.

1,700 tickets sold for Morris Day and The Time