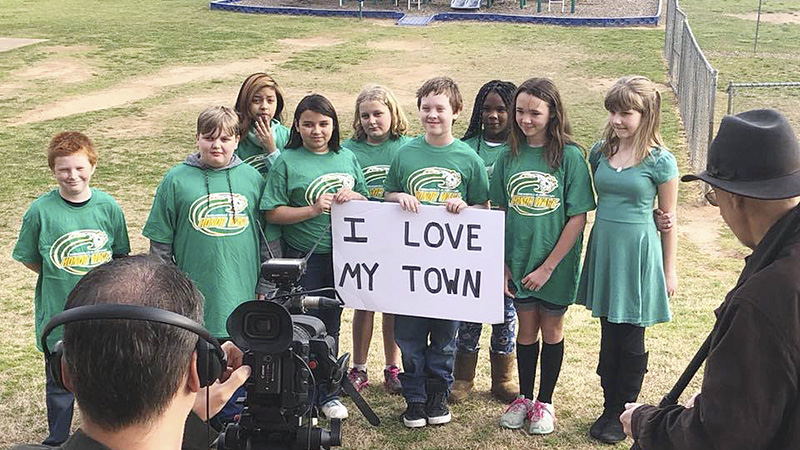 HOGANSVILLE – The City of Hogansville is preparing to kick off efforts to clean up the city with a new anti-littering campaign.

Callaway Elementary School students and Hogansville City Council members recently took part in a video as part of the county-wide campaign to increase awareness for litter in the community. However, the city has more plans for the next few weeks to clean up and raise awareness with events designed to beautify Hogansville.

The first awareness raising event will take place on Saturday.

“This Saturday, it is a bicycle parade in the mill village,” Miller said. “It is going to start at our new library on Johnson Street at 11 o’clock. They are encouraging kids to come to the Hogansville [Public] Library at 10:30 a.m., and we can help them decorate their bikes a little bit with streamers or balloons.”

Miller said that the Hogansville Police Department will close off streets along the parade route to ensure the safety of the riders. The parade will circle the mill village before returning to the library. The bike parade will be just the beginning though.

On Saturday, April 21, the city is encouraging groups, churches and individuals to take part in the Great American Cleanup by giving away trash bags and gloves at Calvin Hipp Veterans Memorial Park to pick up trash in Hogansville. Dumpsters will be provided for the event by C&C Sanitation at the corner of Askew Avenue and Lawrence Street, near Strozier Park and across from Hogansville City Hall.

“At noon we’ll have some refreshments, and we’ll have little awards for people who picked up the most trash or brought in the most unusual item that they found while picking up trash,” Miller said. “It will be a little bit of a cash reward for their group.”

The Callaway High School ROTC, CHS Future Farmers of America, the CHS Honor Society, the Hogansville Boys and Girls Club and representatives from the Georgia Initiative for Community Housing had already signed up by Monday. Sign-up sheets will also be available at Calvin Hipp Park on Saturday morning. Miller said that participating groups will be recognized by Keep Troup Beautiful. There will also be other Great American Cleanup activities in other parts of the county for those who live elsewhere, especially with growing interest due to the recent county-wide campaign.

“As we’ve been planning our Great American Cleanup it has coincided with all of our governments’ efforts with anti-litter campaigns,” said Scott Landa, the executive director of Keep Troup Beautiful.

Landa said that the annual event raises awareness of litter, and Keep Troup Beautiful encourages groups to maintain their progress on their roads and their neighborhoods by adopting an area. Hogansville is also encouraging people to adopt an area to keep clean.

Landa said many local organizations have already signed up to take part in the Great American Cleanup. Groups can take part in the clean-up anytime between now and May 18, but all information on how many people cleaned up and how much trash needs to be reported by that date in order for groups to be recognized as participants. To learn more about Keep Troup Beautiful, visit Keeptroupbeautiful.com or call (706) 884-9922. Hogansville residents interested in the Adopt a Spot program can contact Miller directly at (706) 637-8629.