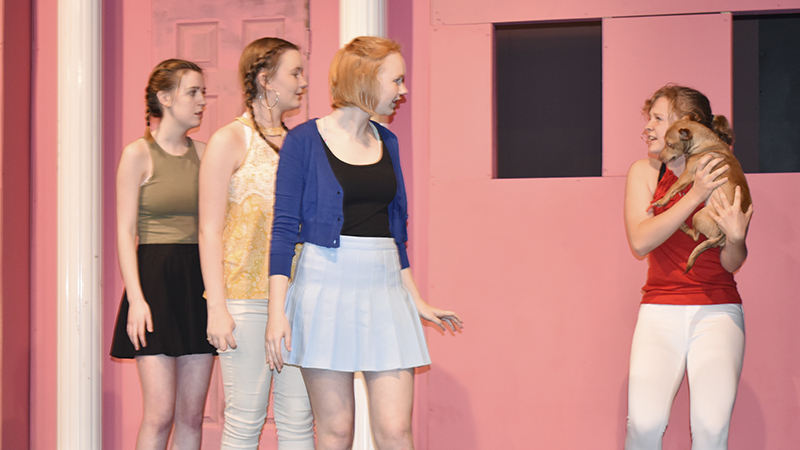 The New Horizon Theater will put on the play Legally Blonde starting Thursday. During practice of the opening musical number, one member of the cast clutches at a pet Chihuahua. --Contributed

WEST POINT — New Horizon Community Theatre will soon be putting on its final production of the 2017-18 season: the musical version of the 2001 novel and film, Legally Blonde.

This award-winning musical is based on the novel “Legally Blonde” by Amanda Brown and the 2001 film of the same name starring Reese Witherspoon.

The musical follows the transformation of Elle Woods as she tackles stereotypes, snobbery and scandal in pursuit of her dreams.

The New Horizon production will feature a cast of 39 talented local performers and the show is sure to have audiences laughing, singing, and tapping their toes.

Production of the play has been interesting, according to Nixon.

“The show isn’t for everyone,” Nixon said. “Several people were offended [mostly due to language] during audition, but we did our best to clean it up.”

Elle and her faithful companion Bruiser travel cross-country from the sandy beaches of Malibu to the hallowed halls of Harvard, following her “true love” — Warner.

Nixon added that as the audience for community theatre changes, so must the theatre itself, if it wants to appeal to both old and new viewers.

The production of the show has had its ups and downs. Issues from casting to rehearsal time have hindered the preparation for this specific show. This past Thursday saw the first full rehearsal of the show, which, per Nixon, is later than usual.

“Between two spring breaks and Easter, we haven’t been afforded any time,” he said.

Prior to rehearsing, the casting process also saw difficulties.

“After casting, several realized there were conflicts and slowly we had 15 people drop out,” Nixon said.

Another issue occurred this past Monday when cast members and West Point officials were alerted to a possible gas leak.

“We cleared the building but nothing happened so we came back in and finished up after the first act,” Nixon said.

Legally Blonde will run Thursday, Friday and Saturday night, April 12–14 at the New Horizon Theatre in West Point, Ga., with curtain at 8 p.m. EDT each night. Saturday will feature an additional 2 p.m. matinée.

Man arrested, $45,000 worth of methamphetamine seized