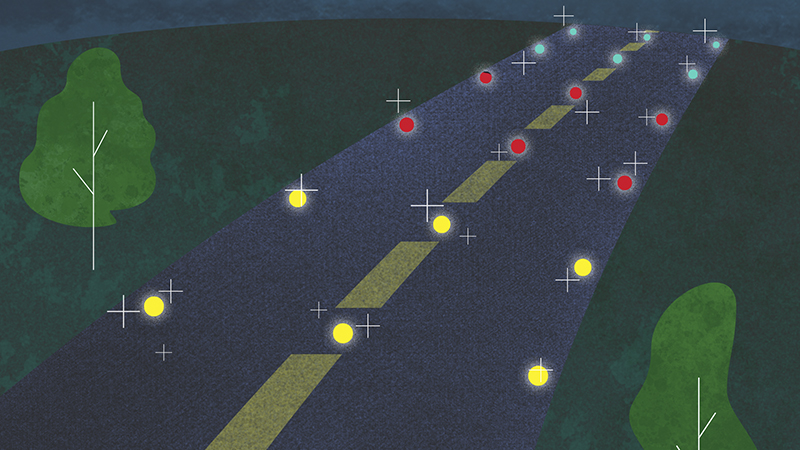 This rendering shows the what smart road dots will look like. Currently only prototypes have been made, but once complete, the technology will indicate road hazards. (Contributed | Daily News)

On Monday, The Ray’s smart dot was recognized as a finalist for Fast Company’s 2018 World Changing Ideas Awards in the transportation category.

The Ray sent a press release on the recognition Tuesday. Its smart road dots are slated to be placed on roadways across Troup County — with plans for areas around the world later — in the same location where reflective dots currently are on roads. The smart road dots will warn drivers of hazards like black ice, heavy fog and accidents.

“What we’ve done is game-changing,” said John Picard, vice president of The Ray and co-lead on the project. “No one expects the road itself to be smart. And not only that but through color, we’ve given the road a way to communicate to all drivers. Real-time Information is key with the smart road dot, and it’s going to save lives.”

The smart road dots will convey information using solar-powered, LED lights corresponding to the hazards. According to The Ray, the smart road dots will also feature backup batteries and may be able to communicate with other dots to sense things like temperature and humidity that could impact road conditions. They would also give an early warning for accidents that might require drivers to slow down using yellow and red lights.

“We’ve always known that the smart road dot was one of the most important life-safety contributions we could make,” said Harriet Langford, president and founder of The Ray. “It’s so exciting to see this innovation recognized by Fast Company. We can’t wait to complete the second prototype and bring our smart road dot to The Ray and the world.”

Judges for the World Changing Ideas Awards selected 12 winners from 240 finalists out of the nearly 1,400 entries. Eviation’s Alice Commuter — a nine-seat electric plane that is expected to begin flights at less than the cost of driving in about five years — was the winner of the transportation category.

However, the smart dots are set to be unique in their impact on rural communities, where smart technologies are not expected to catch on as quickly.

Representatives from The Ray also hope that the technology will “level the information playing field between connected and autonomous cars and classic cars.” According to The Ray, the project will also be one of the first instances of a public, private, philanthropic partnership model being used to create and market a new, life-saving technology.

“Having spent my career in the commercial airplane business where there were no passenger fatalities in 2017, it is difficult for me to imagine that we lose 40,000 lives a year in automobile accidents,” said Alan Anderson, a retired Boeing executive who serves as co-lead on this project and as treasurer for The Ray. “Technology has added distractions to driving, resulting in constantly increasing death rates; it’s time to apply technology to solve the problem. The smart road dot is an opportunity to add intelligence to our roadways, making them part of the solution. We need to always remember that zero isn’t just a goal — it’s achievable.”

Other companies including Walmart, Microsoft, Unicef and the Anti-Defamation League were also honored as finalists for the awards.

The Ray is the sole owner of the intellectual property and the holder for all patents for the smart dots.

According to the press release, “The Ray and its UK-based consultants at Innovia Technology produced the first prototype of the smart road dot in 2017. The Ray will continue in 2018 to improve all aspects of the unit design to produce a version two prototype, ready for pilot testing and deployment.”

It is currently unclear when smart dots will first be seen on Troup County roads, but more information on The Ray can be found at Theray.org.