Many speak out against suggested rezoning of Broad Street property 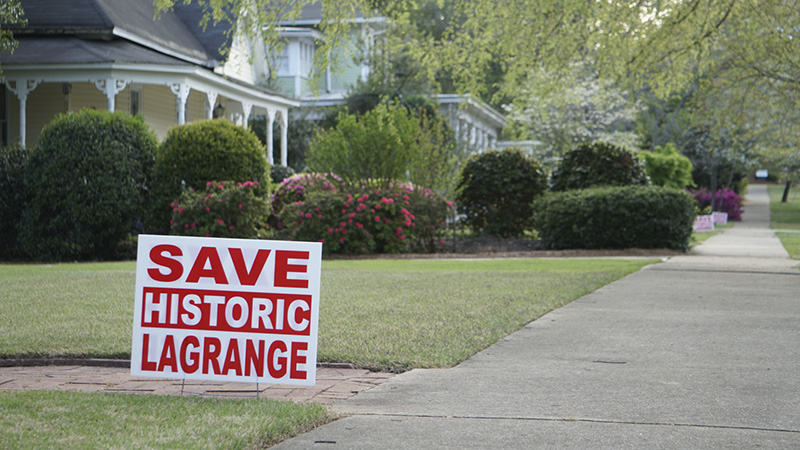 A sign against a proposal to rezone a Broad Street property sits in a yard. On Tuesday night, the LaGrange City Council held a public hearing about the proposal. --Contributed

Residents of LaGrange’s historic downtown turned out in force on Tuesday to argue against the rezoning of a home on Broad Street.

The LaGrange City Council held the public hearing on Tuesday for a request to rezone 409 Broad Street from residential (R-3) to office-institutional-residential (OIR) and rezone 502 and 504 Vernon from neighborhood commercial to OIR. Many of those who spoke expressed concern that the rezoning could encourage more businesses to try to purchase property in the neighborhood, which is currently zoned residential. Others asked that the city consider further regulating the zoning for the neighborhood to discourage similar requests in the future.

“I hope you will protect that neighborhood and deny the request, and secondly take a step in the future to rezone that, so that we don’t fight that every time a house comes up for sale in that neighborhood, and we can keep that neighborhood character in place in downtown,” said Bill Stump, a resident of Gordon Street.

Cathy Schirra, Kim Burch and Cathy Winslow, residents of the neighborhood, also argued against the rezoning saying that it would compromise the historic district and encourage the encroachment of businesses.

“It was speculative. It was more to just market the three lots, and I think that caused a lot of uncertainty for the planning board,” City Planner Leigh Threadgil said during a city work session. “They weren’t comfortable moving forward given the sensitivity of Broad Street and the historic context there.”

According to section 25-35-69 of the code of the City of LaGrange, if the property is rezoned it could be used as an office for real estate, insurance, advertising, architects, registered engineers, attorneys, bookkeeping, accountants, tax consultants, stock brokers and medical and dental offices, travel agencies, administrative offices for associations, registered manufacturers, agents and clubs such as women’s clubs, garden clubs and civic organizations.

“The request that we put in to rezone is to protect the historical nature of this home and Broad Street,” said Kendall Butler, who represented property owner Jim Bridges at the meeting. “… If he were to reduce the price enough to sell it [as residential], it is very possible that it could be purchased in a price point that someone may not keep it maintained, which could hurt Broad Street as well.”

According to multiple realty websites, the property is listed for sale for $300,000. The home was built in 1900.

Residents of the Broad Street neighborhood argued that any rezoning would also negatively impact the neighborhood’s residential nature.

“This change would compromise what has always been a clearly defined residential block,” said Kay Birkeli, a resident of Broad Street. “On our side of the street, we are the last seven homes that lie between town and the front gates of the college. The impact of the loss of 409 Broad as a residence would be huge. It would allow for business encroachment on an otherwise completely residential block.”

In fact, concerns for the historic neighborhood becoming commercial dominated the conversation.

“I don’t want it to look like Vernon Street,” said Nick Woodson, a former city council member whose mother-in-law lives on Broad Street. “… Less than 10 years ago, this same thing came up to rezone it, and at that time, we turned it down. We had a crowd that came up and talked about it then.”

Threadgill said that in addition to the large group of residents at the public hearing, she also heard from residents by phone and email before the meeting. It was also discussed in the meeting that under the current zoning, the home could be subdivided for apartments or even torn down to make way for a new small apartment building, but no one spoke in favor of that idea.

Great Wolf to hold soft opening in less than…