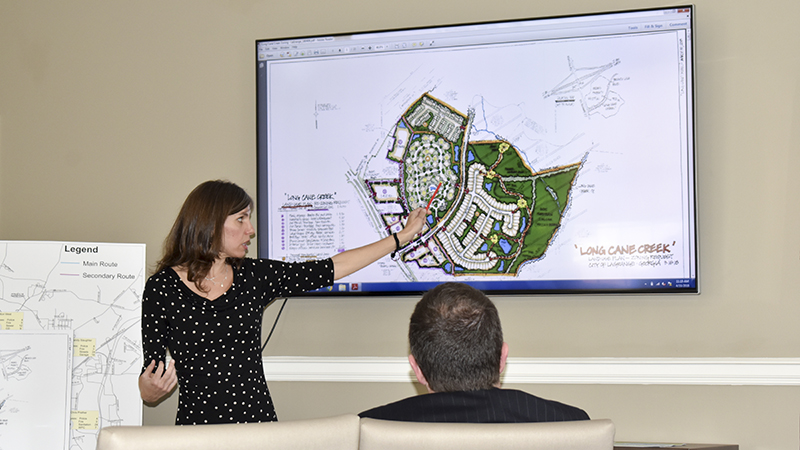 City Planner Leigh Threadgill explains the proposed plan for a property on Hamilton Road if it is rezoned to the LaGrange City Council on Tuesday. --Alicia B. Hill

In the same meeting where residents spoke out against a proposed rezoning of a Broad Street property, the LaGrange City Council called for a public hearing to rezone a 134-acre property at the intersection of Hamilton Road and Bryant Lake Boulevard.

On Tuesday, the LaGrange City Council discussed a rezoning request from general commercial (C-3) to residential (R-3) and high density residential – limited use (HDR-LU). The proposal was discussed in the work session.

“Bryant Lake was annexed into the city and zoned back around 2006, and when it was annexed and zoned, it was done so with what is called a development agreement,” City Planner Leigh Threadgill said. “There were a number of conditions that were applied to the property development. It was a master planned development, so these 134 acres were designated at the time as commercial.”

In the 12 years since, the original owner went bankrupt, and multiple owners took over the Bryant Lake property.

“The owner of these 134 acres has a different vision than the original developer,” Threadgill said. “He alluded to market studies [Monday] that indicate that there is not support for 135 acres of commercial development at this location and instead with our job growth and the anticipated population growth associated with it, it may be a good opportunity to provide some housing.”

Threadgill said the development will feature walking trails, a fitness center, pool and club house. The plan also shows 180 single family lots and 240 to 260 apartments on the land. Twenty one acres of the property would remain commercial under the plan.

“What we hear all the time is that our complexes are full. There is very little vacancy,” Threadgill said. “I hear that a lot, so to the extent that this is a developer that may be serious and may be interested in this build, it could be very valuable. The other thing is most of our existing R-3 is in the northern part of the city. Well, a lot of our job growth and a lot of the jobs these folks are going to be potentially working are going to be in the industrial park, so we don’t have existing apartments [in this part of the city].”

While the city council cannot control pricing, the planning board did suggest requirements on square footage and materials similar to the requirements for homes in the Bryant Lake subdivision that is already behind this proposed development. These requirements would likely impact the price of the homes once built.

The impact of the Hamilton Road widening project on the proposed retail developments bordering Hamilton Road was also discussed, and it was noted that the development would be impacted by recently implemented charges to users of a sewage pumping station in that area.