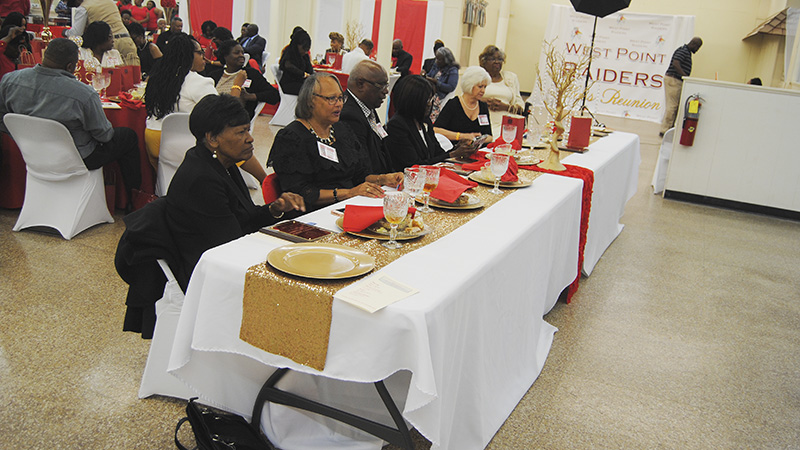 WEST POINT — On Saturday night, the former CraftMaster Furniture building in downtown West Point was rocking with the sounds of the 1970s and 1980s as alumni from West Point High School hosted the first ever Raider Reunion. Anyone who had attended West Point High from 1972 to 1986 was welcome.

The school colors of cardinal and gold were ever-present throughout the building, and the former classmates immensely enjoyed the spring formal-style event.

“This has been a fantastic night,” said event chairman Richard Chapman, WPHS Class of 1983. “We have over 150 people here. Some of them came from a long way from here, and we really appreciate them being here.”

Chapman said that he and fellow alumni are talking about having more reunions in the future.

“We’d like to do it every other year. We’ve all had so much fun here today. It started this afternoon with a tailgate event at John Hoggs Park on 10th Street.”

The night event in the CraftMaster building had a deejay playing popular tunes from the 1970s and 1980s. Lots of old Red Raiders got up on the dance floor to show they could (at least try to) make the moves they could make back in high school.

The Rev. Michael Stiggers, pastor of the Mount Pisgah Baptist Church, LaFayette, was the guest speaker of the evening. He graduated West Point High in 1977.

“Our theme for the day was Excellence in Education,” he said. “It was such a joy talking about that in front of my fellow alumni. We all feel like we got a good education at West Point High.”

There was a professional photographer there to take photos in front of a Raider backdrop.

Hair for a Cause part of busy weekend