Friends of Hogansville theater let their shirts do the talking 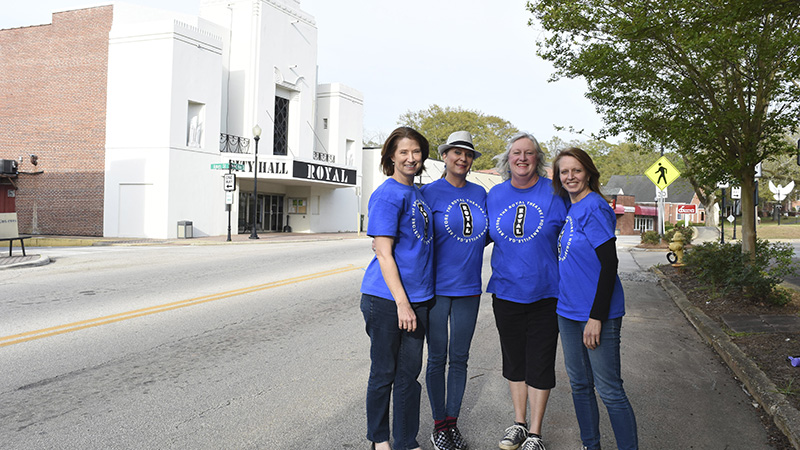 HOGANSVILLE — There are a lot of strong opinions in Hogansville about the Royal Theater, and the building’s future figures to be the focus of attention at Monday night’s city council meeting.

One group has decided to let its shirts do the talking. As discussion about the theater ramped up, the Friends of the Royal Theater group was formed. They are easy to find at council meetings and other public discussions because of their blue shirts, which show support for restoring the theater back to what it was originally intended to be — a theater.

Leaders of the group say the color of the shirts is purposely royal blue, meant to show their support for the historic theater.

“By seeing the shirts, they know we are out there without us having to be super verbal or antagonistic,” said Gayle Devereaux, who is among the members of the group’s steering committee. “They know petitions have been signed.”

At Monday night’s council meeting, Angela Bennett with the Friends of the Royal Theater group will present a petition of approximately 500 signatures, showing support for restoring the theater.

Just above 400 people voted in the mayor’s race in November. Devereaux said not everyone signing the petitions is from Hogansville, but they are nearby.

The theater and its future have been debated in Hogansville for years, but the Friends of the Royal Theater are hoping that now is the time the debate finally ends. They believe there are many areas where the city can move city hall, including the old PNC Bank building.  Mayor Bill Stankiewicz has mentioned that building as a possible home for city hall in the past, though he said at that time that there wasn’t universal agreement on the plan.

The Friends see this as the time for a couple of reasons. First, the theater study was just completed and there seems to be some momentum to move forward. Next, grants are available to restore the theater that wouldn’t be available to keep it as city hall.

During Monday’s presentation, the Friends will present a plan showing the cost to use the theater as city hall and one that would involve using it as a community arts and entertainment space. According to information in the city council’s agenda for Monday, Carter Watkins and Associates estimates the cost at renovating the theater at about $1.8 million to use the theater for either function.

However, estimates show grants and $700,000 worth of SPLOST IV funding could be used to restore the theater at no additional cost, with about $445,000 left over. Meanwhile, projections show it would cost over $1.2 million to renovate the building for city hall. In the theater plan, Carter Watkins and Associates estimates it will cost approximately $177,000 to purchase the PNC Bank building.

According to the agenda, the council is being asked to make a recommendation Monday on which plan they wish to pursue.

“People don’t understand how it would work financially or how to keep it working,” Bennett said. “The city council has a lot of different things on their plate, so I figure it’s our job to educate them. I called a few of these similar theaters in similar markets and asked questions about their daily and yearly operating expenses. Most of them are run by a nonprofit entity. We already have this nonprofit entity set up and ready to go after laying low for the last couple of years.”

The steering committee of the Friends of the Royal Theater was formed under the Hogansville Regional Arts Association, which was started in 2003. The Friends said if grants don’t cover the cost of renovations that they will head fundraising efforts.

“You have a force of people willing to do the fundraising, so instead of yelling, that’s why we decided to do the blue shirts,” said Toni Striblin, a member of the Friends group. “We didn’t want to be like everyone else and tell everyone how they should think and what they should do. We just wanted to show them that this is what we want, and we do it put out on Facebook. People hear us without us having to yell it.”

“This is the first time since 2003, since I’ve lived here, that we have the opportunity for it to move,” Striblin said. “That’s why we started this steering committee through the HRAA because the grant funding has to come through that because its art related programs. A lot of the money can flow through the HRAA.”

According to the architects, the theater building needs work, even if it remains as city hall. It requires general updates for structural reasons, and it currently is not handicapped accessible and does not comply with the Americans with Disabilities Act.

“The theater building is not compliant with laws for disabilities, so it’s kind of a lawsuit waiting to happen from the city’s standpoint,” Devereaux said.

Striblin, who owns Roger’s Pit Cooked Bar-B-Que in Hogansville, said businesses have to be ADA compliant, and city hall should too.

“Any time you open a business in town, you have to be ADA compliant,” Striblin said. “The city hall people will come, and they will give you a fine, or they will lock you up if you don’t become ADA compliant. To make that building ADA compliant would cost over $1 million.”

The Friends of the Royal Theater believe a theater — an actual performing arts center — would be something the city could build around.

“I can understand the money conversation,” Bennett said. “It also actually long-term will handle that problem. You start driving traffic here, you start having something that elevates the quality of life.”

Around 35 shirts have been sold so far, Devereaux said. They are being sold at Blue Train Books at $7 to $9, which covers what it costs to make the shirt. They are also asking for people to donate extra funding if they buy the shirts.

Monday night’s meeting is scheduled for 7 p.m. at the theater.