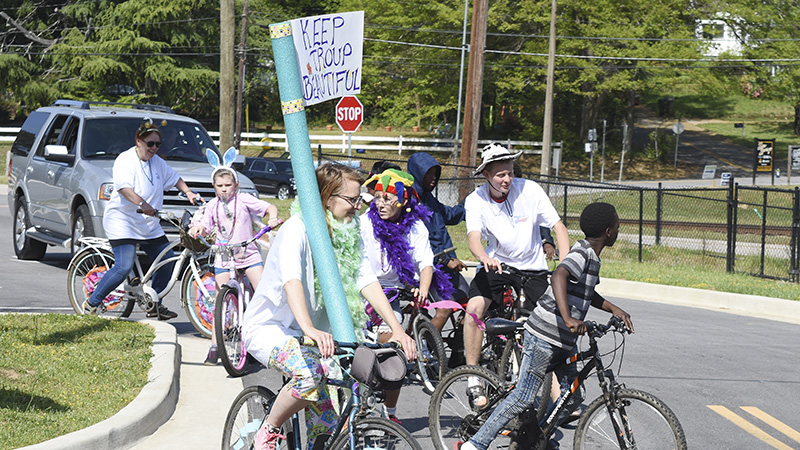 A bicycle parade through Hogansville celebrated Earth Day and gave people of all reasons an excuse to be outside on a beautiful morning.

The first-time parade, dubbed the Earth Month Bike Parade, included around a dozen participants. It was organized by Angela Bennett and by Keep Troup Beautiful, which will organize its annual cleanup Saturday around the county.

“There are kids that ride bikes all over my neighborhood, and I’m a really big advocate of kids getting out and interacting outdoors, doing healthy activities,” Bennett said.

One of the first children to arrive was 9-year-old Xandry Newman, but that gave her plenty of time to decorate her bike and create a costume for the parade. Newman used ribbon, tape and beads to turn her pink bicycle into quite a sight. She also wore glasses and butterfly wings.

“I feel bedazzled,” Newman said, before hopping on her bike and helping to lead the short parade.

The ride started at the Hogansville Public Library and a table was set for anyone who wanted to sign up as a team for Keep Troup Beautiful next weekend.

Bennett’s bike had a homemade flag — made partly with a pool noodle — to remind everyone of that simple message — “Keep Troup Beautiful.”

She said next year it’ll hopefully be bigger. She knew this first parade would likely have a lower turnout, but she wanted to get it started.

“Maybe we’ll pick up a few more on the ride,” Bennett said. “I did see somebody riding a scooter earlier today, and I thought ‘man a lot of kids have scooters.’ I should have made it a scooter parade [too.] We’re just going to learn from this year and get the word out earlier [next time.]”

Three officers from the Hogansville Police Department helped lead the parade, ensuring everyone was safe along the route. Angela Jackson donated fruit for anyone to eat after the ride.

Around 3,500 visitors in Troup County this week for…