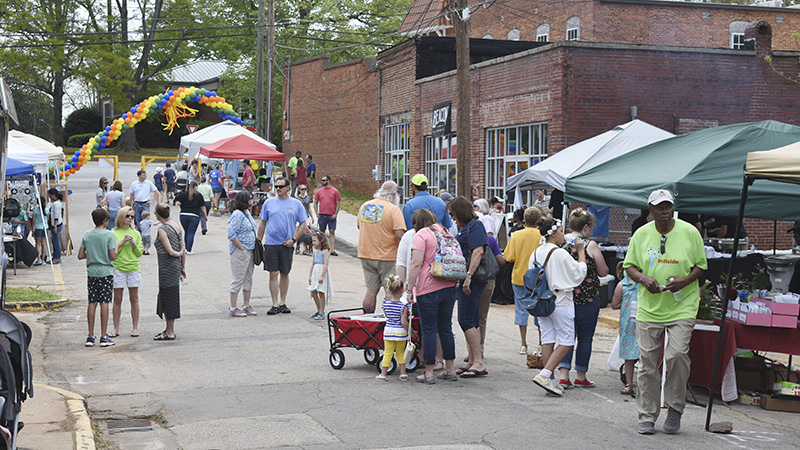 Around 300 to 350 people attended the Hillside Arts, Music and Food Festival Saturday. The festival is in its fourth year and is led by residents with DASH for LaGrange. --Daniel Evans

Hundreds of people attended Saturday’s Hillside Arts, Music and Food Festival Saturday, which once again brought together the Hillside community and people from all over LaGrange.

The event serves as a way to bring people together who passionate about art, food and music. The fourth annual festival was created and led by residents with DASH for LaGrange and included around 40 vendors and numerous bands.

“We started out kind of small, and it has just kind of grown,” said Elia Baltes, who serves as the community development director for DASH and helped organize the festival. “I think in 2014 we had 22 vendors and today we have like 40 vendors, so it’s kind of grown, and we hope it’ll continue to grow. This is what brings our community together.”

The Roving Listeners, a group that has partnered with In-Town West, had a booth set up right near the entrance of Saturday’s festival. Cabriel Bruce, one of the leaders of the Roving Listeners, said they’ve surveyed the Hillside community to see what the needs are.

“They would like to see more park space, more green space. That’s priority one,” Bruce said.

“They want to see the kids have somewhere safe to play and also safety is an issue. Speed bumps. We went out and did a survey, gathering information on speed bumps and revitalizing some of the homes here.”

For two businesses that are new to Hillside in 2018, the festival was a chance to get to know more people in the community.

The Cart Barn recently reopened after moving to Jefferson Street.

“We are having 30 percent more business than [our old location],” said Tony Bishop, owner of the Cart Barn.

Chase Hudson, owner of Beacon Brewing, was enjoying the opportunity to get to know the people of the Hillside community, and give them information on the upcoming brewery, which is set to open in the fall.

“This is really our first time putting our face in front of people. A lot of people knew we were opening a brewery but didn’t know the name, didn’t know what the logo would be. We’re having a coming-out party kind of thing,” Hudson said. “I think we’ve gotten a lot of good feedback. This is our first time putting food in front of people and we’re letting people know we aren’t just a brewery, we’re a full restaurant too. We’re making sure they know that too.”

Leah Watts, who hosts a community movie night in Hillside once a month, had a booth to sell her artwork. Her booth won a first place ribbon.

“This is my third year and is probably the best year I’ve had as far as selling artwork,” Watts said. “There seems to be a lot of traffic, a lot of people in and out. I think it’s growing and having the Cart Barn there is amazing. It’s pulled a lot of people into the neighborhood and it’s a draw. And we’ve got Beacon coming. It’s good exposure.”

Vendors came from other cities to sell art too. Suzi McKibben of Wren’s Nest Pottery traveled from Hogansville, while Linda Giles and Tim Giles, traveled from Newnan.

“It’s been a little slower this year, but still the sales are reasonable,” Tim said. “The two years previously they had the 5K, so more people were here just because of that, but it’s still been fairly steady.”

McKibben said the Hillside Festival is her favorite festival each year.

“They are really good to the vendors and the vibe is good. It’s very positive,” McKibben said. “People come here, and they are just ready to have a good time.”