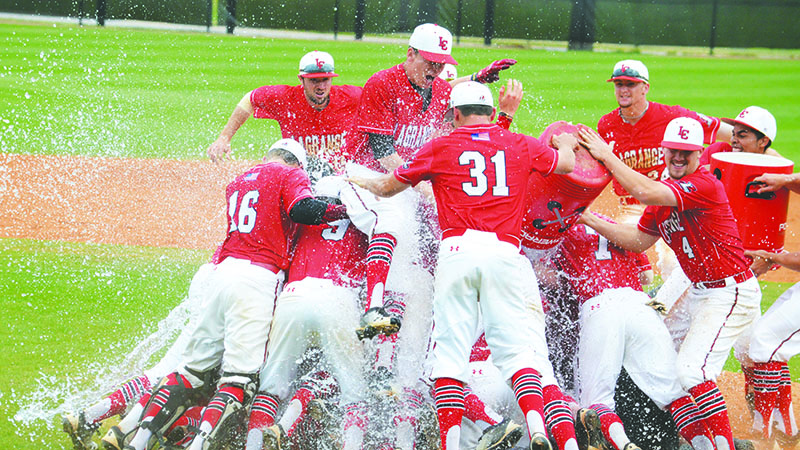 The LaGrange College Panthers outlasted North Carolina Wesleyan 2-1 to win the USA South tournament championship a year ago, and that was part of a special season for a talented and veteran team that went 40-6.

On Saturday afternoon at Cleaveland Field in Williamson Stadium, those same two teams were matched up once again with the conference championship on the line.

The result was the same, and there wasn’t nearly as much suspense this time around.

The Panthers completed a 4-0 stay in the tournament with a 12-7 victory over the Battling Bishops, and they earned the conference’s automatic invitation to the NCAA Division III tournament.

That the Panthers would be in this position was far from a given considering the heavy roster turnover from last year’s team.

Only one every-day player, James Poropatic, was a starter on last year’s team.

While the Panthers (26-15) had their struggles earlier in the season, they’re rolling now, and they’ve won 19 of their past 24 games.

“It’s awesome,” said Poropatic, an outfielder who went 5-for-5 with four RBIs during the championship game. “Last year we had a bunch of older guys, a bunch of seniors. This year it’s a whole new lineup. It took a while to gel together, and we’re playing our best baseball right now. It’s a great time for it.”

LaGrange College opened the tournament with a pair of close wins.

After beating Ferrum 2-1, LaGrange needed extra innings to top Piedmont 5-4 and remain in the winner’s bracket.

On Friday, LaGrange College overwhelmed North Carolina Wesleyan 12-3, and it won the rematch a day later to secure back-to-back titles.

“It was 100 percent a team effort,” LaGrange College head coach David Kelton said. “All our pitchers did a phenomenal job. Defensively, we had a couple of little blunders, but outside of that we played really good defense in this tournament. And the execution offensively throughout the whole tournament was great.”