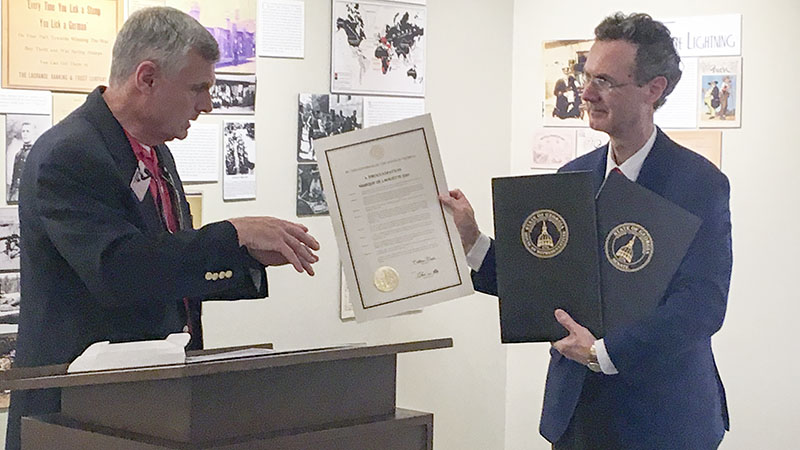 Georgians will have reason to celebrate Sept. 6 from now on thanks to a series of proclamations declaring the date Marquis de Lafayette Day.

“I appreciate what y’all are doing. Y’all are really getting out and educating the world about a gentleman who is so important to the history of not only the western part of this state, but our country as a whole,” said State Sen. Matt Brass, R- Atlanta. “I talk about education. Just getting this proclamation, this resolution done has educated me on this man.”

LaGrange has lead the charge to increase awareness for the historic figure. In 2007, Jeff Lukken, the mayor of LaGrange at the time, proclaimed Sept. 6 as a day to celebrate Lafayette in LaGrange because that is the birthday of Marie Joseph Paul Yves Roch Gilbert Du Motier, better known by his title the Marquis de Lafayette.

Now, the Lafayette Alliance is working to educate everyone from school children to adults on what Lafayette accomplished during the Revolutionary War.

“I love the idea of the things that you are doing, and I am sure that we can get you before the economic development and tourism committee to make that presentation,” said Georgia House Rep. Randy Nix, R-LaGrange. “I think that bodes well for your idea of expanding this, not just on a statewide basis, but expanding the reach from LaGrange where LaGrange becomes the center of this educational effort.”

The significance of Lafayette to the United States reaches far beyond his statue which decorates Lafayette Square. He played a major role in the American Revolution and is said to have influenced some of the founding principles of the United States.

To learn more about Lafayette Alliance, visit them on Facebook.