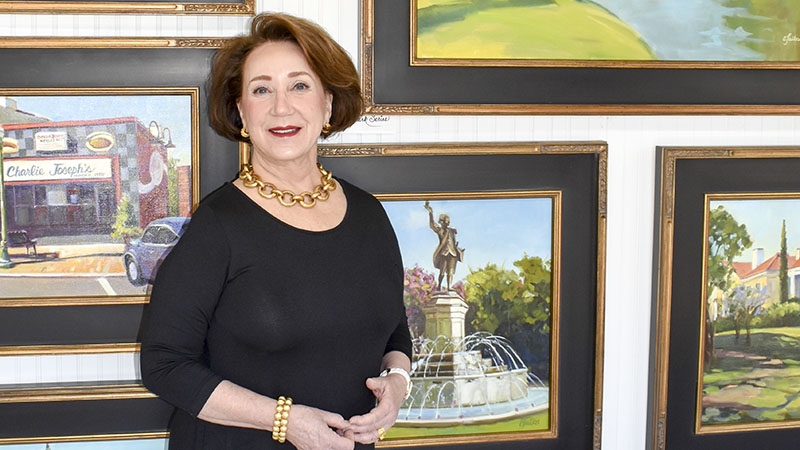 Cindy Fulks has painted a series of pictures featuring some of LaGrange’s most notable features. (Alicia B. Hill | Daily News)

If you were to close your eyes and picture some of the best known sites of downtown LaGrange, there is a good chance that mental picture would look a lot like Cindy Fulks’ recent series of oil paintings.

Fulks has been painting for years, and many of her works are inspired by architecture, though animals and nature are also frequently featured.

“I have done a LaGrange landscape series, and this is a group of ten paintings of favorite [locations] of everyone in LaGrange,” Fulks said. “They are now on display at Studio 114. This LaGrange series has a painting of the museum, another one of Hills & Dales and one of the chapel at LaGrange College, one of Charlie Joseph’s, Highland Country Club’s signature golf hole, Lafayette on the square. It is a really exciting series.”

The series is currently on display at Studio 114, the studio space connected to the LaGrange Art Museum. Fulks creates many of her paintings at the studio.

“I love architecture and landscape,” Fulks said. “I do representational art, so it may not be an exact photograph, but it is my representation of what I see. I work in alla prima. It is a French word for a technique where you finish a piece of art while the painting is still wet.”

She said she enjoys using the technique because of the control it gives her over the light and shadow in a piece.

“You start with an idea and a design, and then continue to create it basically before you lose that concept,” Fulks said. “Some people stop and a week later come back. It is harder to finish the play of light and shadow unless you keep going with it.”

Fulks said that art has been a major part of her life since childhood, and she grew up studying artistic masters on her father’s knee.

“My dad was an artist and an art director of an art firm [in Virginia], so I grew up surrounded by art books and projects and just assumed that was what every little child did,” Fulks said. “We looked at old master art books, and we learned about the old masters and how they did their work. It was really informative for me in those early years.”

At that time, advertising was typically created using fine art instead of computer graphics, so those early experiences taught her to appreciate art.

“We were always taught to enjoy beauty and color and nature,” Fulks said. “When you grow up with an artist, you feel a whole lot more. You learn to see a whole lot more that way.”

Fulks went on to earn her bachelor of arts degree in business from Longwood University and a career education certificate from the University of Georgia. She moved to Georgia after she was married, and she enjoyed professions both related and unrelated to art over the years. She began to persue art seriously 15 years ago.

“About 15 years ago, I got really serious, and I decided that if I was going to do this, I needed to take classes weekly and put the brush to the canvas and do as much as I could and learn as much as I could,” Fulks said. “And I started doing that. I take a class in Atlanta once a week.”

Even with these weekly classes in addition to her work with local artists, both in the studio and as a member of the Visual Artists Alliance of LaGrange, she acknowledged that she still has a lot to learn.

“Art is something that, the more you learn, the more you realize what you don’t know,” Fulks said. “It opens up so much, not only in technique and theory, but what other people are doing and how to express different things. It is just mind boggling when you start to study it all.”

Fulks recently participated in the Plein Air Meriwether, where artists painted outside then exhibited at Artisans on the Square in Greenville. Fulks’ work is still on display at the gallery.

Her art can also be seen at WellStar West Georgia hospital and hospice, the lobby at the Lafayette Society for Performing Arts, the halls of Studio 114 at the LaGrange Art Museum and at Chick-fil-A’s corporate office.