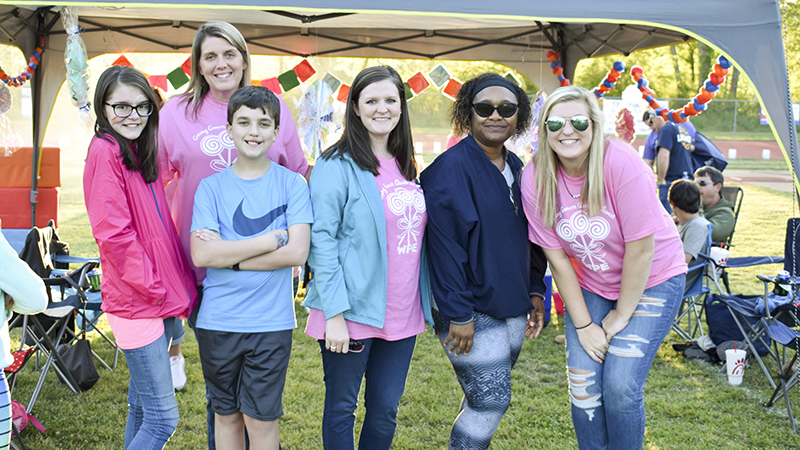 Despite a lower turnout than past years, the 25th annual Troup County Relay for Life raised most of its $100,000 goal for 2018 by Friday.

According to the Relay for Life website, the event had raised $63,726 as of Monday. However, some major donations from Friday’s event — like a $35,000 donation from Kia Motors Manufacturing Georgia — were not included in that amount.

The Relay participants played giant board games while others walked around the Chris Joseph track.

“Our theme this year was very successful,” said Lynn Howard, grand marshal for Troup County’s 2018 Relay for Life.  “It was knock cancer off the board, and everyone decorated with board games. So, it is like they are all playing a different board game, and they are loving it. It really worked out well.”

This year’s event was also notable because every school in Troup County raised funds for the 2018 Relay for Life.

“We had 100 percent school participation,” said Caroline Bena, American Cancer Society Relay community manager. “That is huge. Every single school in the district fundraised at some point. That rarely happens in Georgia, so they will be getting an award later in the year.”

That participation from local schools and local organizations is essential to an event like Relay for Life, which is volunteer planned and led.

“One thing we are really proud of about Relay is that it is volunteer planned and volunteer led, so this is one of the biggest fundraisers in the country,” Bena said.

“The fact that Lynn [Howard] and Cherise [Costley] planned it [is awesome].”

Planners also pointed out that many people raised funds for the event even if they could not attend the walk.

“We had a lot of competition today,” Howard said. “A lot of our people are at Sweetland [for the concert], but we still have I would say three quarters of our teams here. We had 48 teams this year, and everybody seems to have quite a few people participating. We had a great survivor walk.”

To learn more about Relay for Life visit Main.acsevents.org/site/TR?pg=entry&fr_id=88704