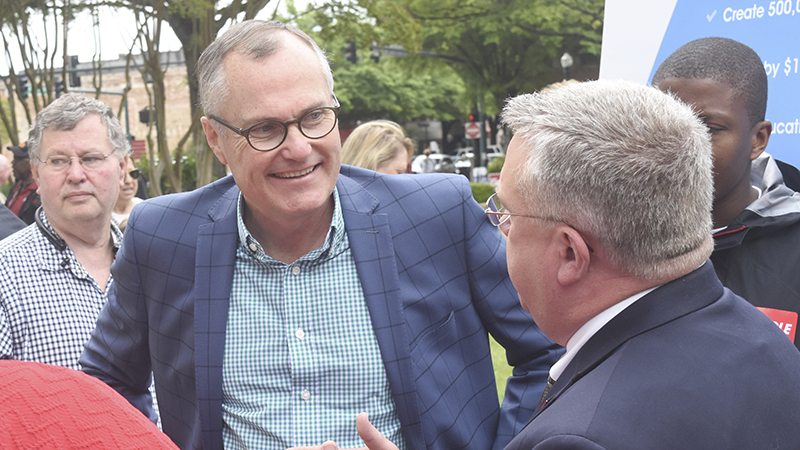 Lt. Gov. Casey Cagle continued his bus tour around the state on Tuesday, making a stop at Lafayette Square in downtown LaGrange. Cagle, one of nine candidates running for governor of Georgia, reminded supporters that he’s served under two governors and has been through the ebb and flow of the economy.

“We have so much to be thankful for,” Cagle said. “We have seen in the private sector 670,000 plus jobs created all across Georgia. There have been 40,000 businesses that have been created in Georgia as well. Our venture capital presence is also quadrupled as a state.”

Based on polling, Cagle appears to be the frontrunner to replace Gov. Nathan Deal, who is term-limited. However, seven candidates are running as Republicans, meaning a run-off election is likely to be needed following the primaries on May 22. State Sen. Hunter Hill, Secretary of State Brian Kemp, former Navy SEAL Clay Tippins, Eddie Hayes, Marc Alan Urbach and State Sen. Michael Williams are also running as Republicans.

Whoever wins the Republican primary will face off against the Democratic winner — Stacey Abrams or Stacey Evans — in November.

During his campaign speech Tuesday, Cagle mentioned the role he played in the creation of college and career academies around the state of Georgia, such as THINC College and Career Academy in LaGrange.

Following his speech, Cagle sat down with The LaGrange Daily News for an interview.

Cagle discussed Troup County’s growth and how he believes his plans for the state will help the county fill jobs coming this way.

“A lot of communities aren’t as blessed as LaGrange, but LaGrange can be even better. I want to help them do that. I don’t want to dictate to them, but I want to give them more options,” Cagle said. “When I’m sitting down with an economic development prospect, I want to have a lot of confidence and say ‘you should look at LaGrange. They have a college and career academy and they have all of the assets you need to be successful.’ That’s the key is the partnership.”

“It’s what happens when you’re the frontrunner for governor,” Cagle said. “There’s no evidence of facts to it whatsoever. We took a state plane that was for official business, plain and simple.”

Following an earlier bus stop in Carrollton, additional stops were planned for Columbus and Albany Tuesday. The bus tour will visit 40 counties over two weeks.

Calling all artists: Hogansville asking for entries for Hummingbird…