Troup runners get it done 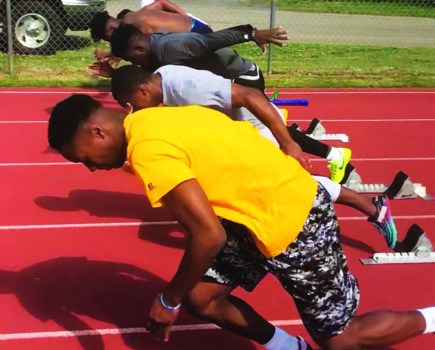 Troup’s Ashanti Tigner picked the right race to have a shaky start.

Competing in the preliminary round of the Region 5-AAAA meet last week, Tigner’s hopes of delivering a fast time in the 100-meter dash were derailed by a poor start.

Fortunately for Tigner, she did well enough to advance to the finals.

“I came in fourth overall in the prelims,” Tigner said. “I had a bad start. In the finals, it was like I’ve got to do what I can to win.”

She started quickly, and she ended up crossing the finish line ahead of each of her competitors to win the region championship in the 100.

Tigner posted a time of 12.38 seconds, and she finished just ahead of Chapel Hill’s Derica Price (12.46 seconds) and LaGrange’s Annaya Chelcy (12.47 seconds).

Tigner’s win was part of a successful day for Troup’s track and field team at the region meet in Carrollton.

Numerous members of the team qualified for the Class AAAA state sectional by finishing fourth or higher in an event at the region meet.

The state sectional will be held on Saturday in Columbus, with the top finishers advancing to the state finals.

Among Troup’s qualifiers was Mark-Anthony Dixon, who won the 200-meter dash and finished second in the 100.

It was similar to the day Tigner had.

Another one of Troup’s qualifiers was Catherine Leveritt, who was fourth in the 400-meter dash, and she was also a member of the 400-meter relay team that placed fourth.

Leveritt is a cross-country standout at Troup, but she prefers the speed events, and she is an accomplished sprinter.

At the region meet, Leveritt had the fifth fastest time in the preliminary race, but she improved her time by two seconds in the finals (1:01.30) and finished fourth to qualify for the sectional.

In the 400 relay, Leveritt ran the first leg, and she was followed by Tigner, Markiya Harris and Destiney Stephens.

Troup’s time of 51.26 seconds was good enough for fourth place.

Another one of Troup’s individual qualifiers was Larodia Ramsey, who was third in the high jump with a leap of 4 feet, 8 inches.

The Troup boys’ team was led by Mark-Anthony Dixon, who outraced the competition at the region meet to win the 200.

Dixon had the seventh-fastest time in the preliminary race, but he turned it on in the finals and won the event.

Dixon had a time of 22.31 seconds, and that was a hair faster than second-place finisher Tyre Shelton of Chapel Hill (22.38 seconds).

After a fifth-place showing in the preliminary race, Dixon finished second in the finals with a time of 11 seconds even, and he was edged out by Shelton in a photo finish.

The team of Tyree Carlisle, Dixon, Jamari Thrash and Kobe Hudson finished third in the 400 finals after posting the sixth best time in the preliminary race.

Alonzo Ogletree finished fourth in the 300-meter hurdles to qualify for the sectional.