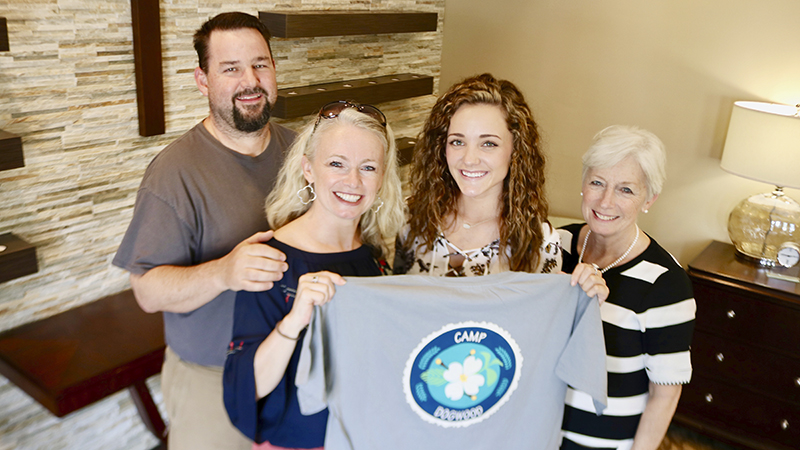 “My mom had heard about Camp Dogwood and thought it would be good for me because my grandfather had died earlier that year,” said Courtney Webb, now 20 and a sophomore accounting major at LaGrange College.“When I first got there, I didn’t want to stay. But by the end of the weekend, I didn’t want to leave.”

Webb is returning to Camp Dogwood Friday to Sunday, June 1-3, this time as an “in-group buddy,” a volunteer who assists a certified counselor in a small group of children who are all about the same age.

She will be an in-group buddy to Lynn Sosebee, who had served as her counselor at Berta Weathersbee Elementary School in 2004 when Courtney’s grandfather died. Lynn has faithfully served as a volunteer counselor at Camp Dogwood for almost 20 years.

“I’m excited to be going back and experiencing it from a different perspective,” Webb said. “I remember that I had a lot of fun there, but I also learned a lot about opening up and dealing with the emotions of losing someone I loved very much. I also learned that I wasn’t alone, that there were other kids my age dealing with the same loss I was.”

This is the 22nd year WellStar West Georgia Hospice has offered the weekend overnight camp, which is open to children who have completed kindergarten through seventh grade from Troup, Coweta, Heard, Meriwether and Harris counties who have experienced the loss of a loved one in the past year.

The camp is funded completely through donations to West Georgia Hospice from individuals and businesses and serves about 60 children at no cost to their families.

It also relies on the help of about 75 to 85 volunteers.

Webb will see other familiar faces that weekend, like Scarlet Riley, who served as the “in-group buddy” in Webb’s group when she was a camper. Riley has volunteered at Camp Dogwood for the past 20 years after her aunt, Joyce Wood, encouraged her to give it a try.

“Joyce had been a volunteer with West Georgia Hospice from the very beginning, so if you’re Joyce’s relative, chances are you’re a volunteer too at some point,” said Riley with a smile. “My mom started volunteering at Camp Dogwood the year before I did, and it’s just been something that our family enjoys being a part of.”

While Riley has helped in the small groups for the past two decades, her mom, Faye Wood, has volunteered for the past 21 years with another important component of Camp Dogwood — the food.

“One thing’s for sure: we have a strong army of volunteers in the kitchen, and we are sure we feed all the kids very well throughout the weekend,” Wood said. “They’re definitely never going to go hungry. They’ll have lots of fun, and most important, they’ll feel loved.”

He has chaperoned in the boys’ cabins, fished with the campers and served as an “out-of-group-buddy.” Out-of-group buddies take the campers from one activity to another.

“My dad died three years ago, so during some of the kids’ activities I tend to think about him a lot,” he said. “When I’m interacting with the kids, I think about the emotions and feelings I’ve gone through since losing him. It helps me relate to them and what they’re going through.”

Most of Camp Dogwood’s group counselors are local school counselors who volunteer their time and service year after year.

Camp Dogwood is designed to give the children guidance as they reflect on their loss and learn they are not alone as they meet other children who understand the depths of what they’re feeling, said Tammy Forbus, WellStar West Georgia Hospice community outreach and volunteer coordinator.

“Some of our children have lost their father or mother, and some have even lost both in one year,” Forbus said. “Others have lost grandparents who served in the role as parents for them.  They may have lost other relatives or a close family friend. These are life-changing and devastating losses for them. We learn some ways to cope when our emotions seem overwhelming. We also learn that memories can be healing and comforting.”

Besides small-group sessions such as “Feelings,” “Hope Is…” and “Memories,” the kids also participate in activities such as fishing, water-sliding, swimming, horseback riding, making arts and crafts, such as a memory pillow and playing games.

To request a child’s camper application or a volunteer application be mailed to you, contact Forbus at campdogwood@wellstar.org or call (706) 845-3905.