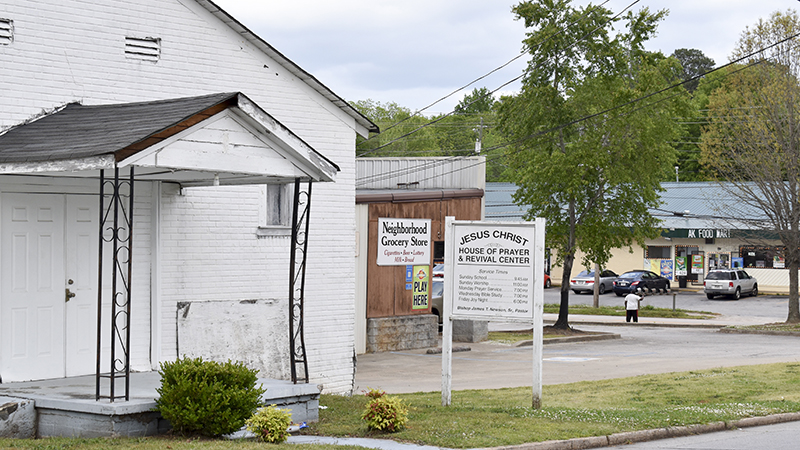 Neighborhood Grocery Store’s sign is shown next to the sign for Jesus Christ House of Prayer and Revival Center. --Contributed

On Tuesday, a local business owner lodged a complaint against the City of LaGrange during a council meeting.

Neighborhood Grocery Store, located on Whitesville Road, applied for a license to sell alcohol last year, and that license was granted. However, it was later pulled after it was determined the business is located within 300 feet of a church, which is against the city’s requirements for this type of alcohol license.

Store representatives argued that since major renovations had taken place at the location following the initial license approval, the spacing requirement should be waived.

“One of my clients, ADA or Neighborhood Grocery, applied for a liquor license in August 2017,” said Millie Rice of Xpress Tax Services. “We went through several things with Mr. (Alton) West, and one of the employees that tracked everything because there is a church in back of it. Nobody could find that that church was active at that point, so they got their license and didn’t have a problem.”

Section 30-20-120 of the Code of The City of LaGrange prohibits the sale of alcohol within 300 feet of any church, except in the case of “a class B retail pouring outlet located within the downtown development area, for which there shall be no distance requirement.” Because of this passage, whether the church was operational could prove to be the deciding factor on the liquor license.

“We went down in December and renewed the license,” Rice said. “They got their advertisements to go up on the double doors and planned to open on March 15 when Mr. West comes over and tells them their license has been pulled because the church had said that they were very active, and they were not wanting that there.”

West said that the license was pulled when the church reported that it was in operation and had concerns regarding the store’s location.

“[Rice] came in and reported to a license coordinator that she had reached out to the church there and said that the church was not in operation,” said Alton West, director of community development for the City of LaGrange. “Based on that information, the license coordinator looked up the utility account and saw that it was low usage. A church would normally have low usage if they are only active on Sundays, Wednesdays and Mondays. … At that time, they also applied for their beer and wine license that was approved, and it was approved in error because I later talked with the pastor of the church, Mr. James Newson, who said that they had been there and had been in operation for the past 36 years.”

Rice claimed that she had received all information on the church from official sources at the city. She also claimed that the church had only held three services since March 15.

“They put about $81,000 into that remodeling of those two sections, and now they are out,” Rice said. “They can sell groceries, and they can sell lottery (tickets), but that is not going to cover them.”

The city has also received a complaint on the store’s location from the LaGrange Housing Authority that adding another store that sells liquor to the area could hurt chances of receiving funding for neighborhood revitalization.

Heard said she was also concerned about the impact that additional alcohol sales would have on residents of the housing authority.

“I know I can’t tell people what to drink, what to buy, but I also don’t want to put it in their face and put the temptation and [make it] more desirable than they need,” Heard said.

However, while the LaGrange Housing Authority is in a drug free zone, the ordinance does not address the types of businesses that may be located near it, so the church remained as the prohibiting factor.

Rice requested that the city allow the store to operate and sell alcohol during hours when the church is not in operation. However, city staff does not have the power to allow an exception based on hours of operation, so that decision would fall to the council.

“Unfortunate though it is, the license was approved in error, and I do feel for the client, but I do not have the power to make any changes to the ordinance as it currently stands,” West said.

Mayor Jim Thornton confirmed that city staff would not be able to override the ordinance as written.

Additionally, Rice argued that the city should follow the example of the state and have no spacing requirements for alcohol sales. A partner of ADA, Inc. also spoke in the meeting, though his full name was not stated. He claimed that he had spent $100,000 on the store that could not be recovered if the license was not issued.

No action was taken by the city council on the matter on Tuesday.

A date for further discussion was not announced. The pastor of the nearby church, Jesus Christ House of Prayer and Revival Center, could not be reached for comment on Wednesday.