Keeping you charged: Battery brand to manufacture all AA, AAA batteries in LaGrange 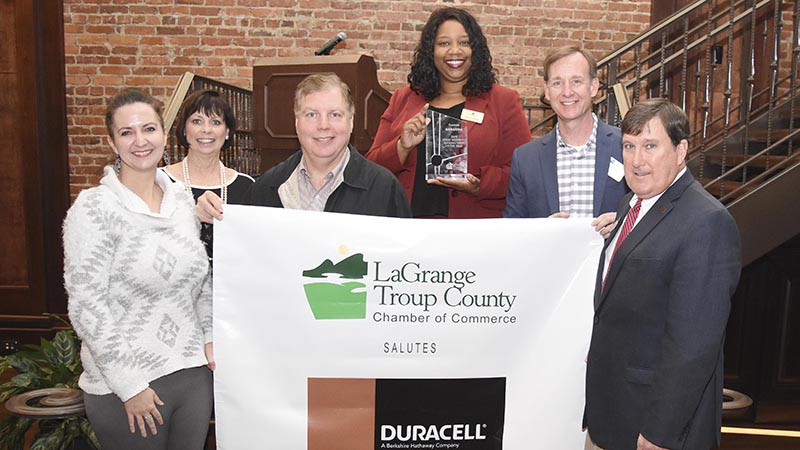 Duracell was named the 2018 Large Business and Manufacturer of the Year at the LaGrange-Troup County Chamber of Commerce’s March meeting. --File Photo

Two years ago, Duracell announced it would shift production of AA and AAA batteries to its plant in LaGrange — a move the company is still in the midst of making.

Duracell announced the move in 2016, saying it would be closing its plant in Lancaster, South Carolina within three years. In a press release detailing that decision, Duracell announced the move would create more jobs at the LaGrange facility. Duracell said it would not release information as to how many people are currently employed at its LaGrange plant, nor how many people will be employed in 2019 after the Lancaster plant closes.

However, the company is very clear in two things. First, the move to LaGrange is in the best interest of the battery-manufacturer overall. Second, Duracell believes LaGrange is the perfect place to be successful in the future.

“[The move] is in the overall best interest of the company, our employees, our customers and the communities in which we belong that Duracell is taking this step to enhance the long-term health of the Duracell brand and business,” said Rich Abramowitz and Patrick Bowers in a joint email statement to the LDN. Abramowitz is the director of communications and government relations at Duracell Company, while Bowers is the plant manager at Duracell’s LaGrange facility. “It’s the way we will continue to grow, maintain our industry leadership and be a great place to work for decades to come.”

So, why is LaGrange the perfect place for Duracell?

“The site maximizes our production infrastructure, and it is well located with regard to transportation links where there is adjacent land for future expansion,” Abramowitz said in an email. “The consolidation with the Duracell LaGrange Business Center will provide both new career paths and deeper opportunities because of the multitude of disciplines on site.”

Abramowitz and Bowers said that some employees from the Lancaster plant have been offered positions in LaGrange. The packaging plant in Cleveland, Tennessee is also expected to close this year, according to various media reports.

“Some employees have been offered positions in LaGrange and have already relocated or will be relocating,” the company said in a statement.

Duracell was purchased by Warren Buffett’s company, Berkshire Hathaway, in 2016.

The LaGrange plant opened in 1980 and primarily manufacturers AA and AAA batteries. According to an email from Abramowitz and Bowers, the plant also produces a major component of batteries that is shipped to other plants for further processing into batteries.

“Our plant personnel are well-integrated into LaGrange and the surrounding community, providing leadership and high-quality investment in our employees,” Abramowitz said. “The plant is on the cutting edge of production technologies and is pioneering production technology.”

Duracell was recently named the LaGrange-Troup County Chamber of Commerce’s Manufacturer of the Year for the second year in a row.

“It’s truly exciting for us. We won last year, and we won again this year, so it’s been a fantastic two-year run for us,” Bowers said after Duracell was awarded the honor at the chamber’s March Early Bird Breakfast.

“I think the company as a whole has been investing like crazy in LaGrange, which is great. We’ve got a really good base for the future here in LaGrange, and we need strong, talented people as the company continues, and we move forward.”

Duracell employees have contributed to community growth in many ways, including giving through the United Way and serving on boards.

“Duracell gives back to the LaGrange community in many ways including major United Way campaigns and leadership as a member of the United Way Board, working with THINC College and Career Academy (also serving on the board), Partners in Education with Berta Weathersbee Elementary, as well as active members of the LaGrange Chamber of Commerce,” Abramowitz said.

Duracell is also part of the newly-formed Georgia International Business Park, the largest business park in the southeast.