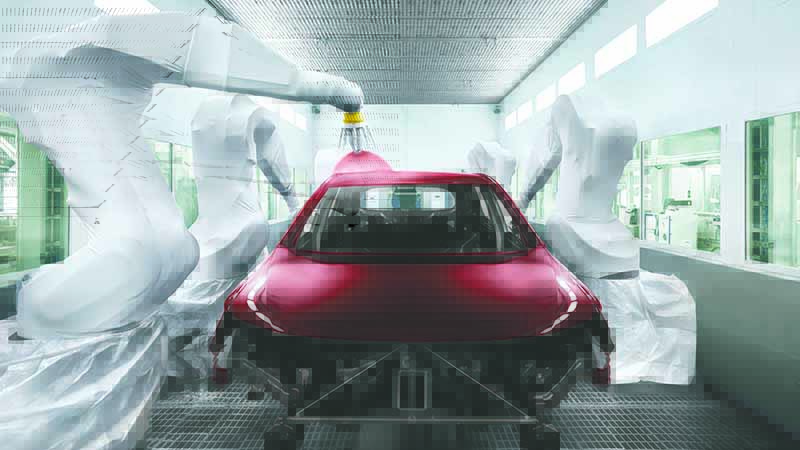 WEST POINT – Kia Motors Manufacturing Georgia began production in Troup County on Nov. 16, 2009, with the Kia Sorento CUV, and eight years later, the company has built more than one million Sorentos in addition to the Optimas that are now built in the West Point facility.

For Stuart Countess, president of Kia Motors Manufacturing Georgia (KMMG), the number of cars built in the plant and the quality of those cars are proof of good workers in the area.

“They find pride in knowing that they are recognized as the number one brand, that this plant produces award winning cars,” Countess said. “There are plants that have been around 30 and 50 years that have not done what these folks have done in eight and a half years.”

The vehicles built at the Georgia plant are the brand’s two top selling models in the U.S. — The Sorento and Optima. The 2018 Optima earned the 2018 Insurance Institute for Highway Safety Top Safety Pick award for midsize cars.

“It is just the people here. We have a good team environment,” Countess said. “They know that things are going to change because consumers are demanding change always, and it is [a matter of] how do you accept those changes and get better as you bring those changes on board. I think the future is bright.”

KMMG is largest employer in Troup County and was responsible for the creation of more than 15,000 jobs in West Point and the surrounding area. Countess said the plant began 24-hour production surprisingly quick by industry standards, and the plant’s ability to do so was because of its employees.

“Running 24-hours a day, there is no stop time outside of the lunch periods, so when you watch how a group of folks tag one another — ‘this is my last car. The next car is yours’ — at least from my viewpoint in production, it is very interesting how they have collaborated and figured out how to make that system work,” Countess said. “Personally, I’d never seen it done before, and within literally three to five days, it was seamlessly moving through our system. It amazed a lot of us who had been in the industry for quite a while.”

He also pointed out that many employees have been able to rise through the ranks within the company.

“We’ve had a lot of people who have grown within the company,” Countess said. “We’ve had a lot of production team members who have ascended to different levels. Whether they’ve taken a specialist level or moved into some type of supervisory role, so there has been a lot of opportunity and growth from that perspective. You can also look at individuals who maybe never had a lot of programming experiences, and in some areas, they’ve had the ability to learn that as a new trade or aspect of their own personal growth. It has been good from all sides.”

KMMG is the first manufacturing site in North America for the Kia Motors Corporation, which is based in Seoul, South Korea. However, Countess said that KMMG is fully committed to the Troup County community.

“Our philosophy has always been to be an active participant in the community,” Countess said. “For us to locate here, there was a great workforce for us to draw from, and that turned out to be more than 100 percent correct. But, you also have to work and give back into the community. This is where we live. Obviously, it is where we work, and we think that there is a lot of advantages to doing that.”

In recent years, KMMG has donated to the Enoch Callaway Cancer Center, the J. Randy Jackson Scholarship Fund and THINC College and Career Academy to name a few. These donations went directly to people who live in the Troup County community.

“This is our home, and I don’t think that will ever change,” Countess said. “If anything, it is changing always for the better. The more people you get, the more involvement with individuals you get. You have to be a good steward of where you are. That is important to us — not only volunteer services, but the financial piece that we have contributed to the community is important.”

KMMG team members have also personally contributed to the community through donations to Toys for Tots and taking part in local fundraisers.

“It is important to our team members too,” Hodges said. “They want to belong to a company family that cares about the community. We see that. Looking at the generational research, that feeling is even stronger in the younger generation, so as we continue to move on through this cycle, I think we’ll continue to see more and more team members really passionate about the company’s commitment to the community.”

Attracting young, skilled workers to jobs has been cited as a challenge for manufacturers across the board.

“Society today doesn’t seem to value jobs in the manufacturing sector like they do in some other areas of the economy,” said Corinne Hodges, senior manager at Kia Motors Manufacturing Georgia.

KMMG is fighting to change misconceptions about what it is like to work in a plant by offering tours to local students, teachers and counselors. Between 600 and 700 eighth grade students tour the plant every year, according to Hodges.

“Bringing in high school students, even as young as eighth graders, for factory tours through the school system, I think that has certainly benefited us,” Countess said. “It clearly has opened some people’s eyes. Now, we need to follow through with it and see how for it takes us. Those kinds of things need to become more commonplace. They can change people’s views of this type of manufacturing environment.”

He said that it is up to manufacturers to show people how manufacturing jobs can be desirable through clean facilities, good pay and opportunities for advancement.

“There are good wages in many of those areas, and we have to find a way to communicate that to the candidates who are going to go into those, but also to the parents, that there is a good living salary in those areas,” Countess said.

“It is something that I have seen in my years. People have started off in those areas, then they build themselves, and they are doing many other things outside of where their original intent was. Then some people like to stay in [the same position]. That is a personal choice.”

Even with these efforts, Countess said companies often face shortages in certain fields, like maintenance.

To ensure that young people have the opportunity to learn about the most in demand fields, KMMG has partnered with the Troup County School System, THINC College and Career Academy and colleges like West Georgia Technical College.

“My view on industry right now is that it moves so quickly with development and various technologies, that it is hard to keep up with how quickly we are moving, so I can feel a little bit from the education side of it,” Countess said. “It is just not an easy thing, so what we’ve had to do is create some partnerships — be it with THINC or the Troup County School System, technical college system, even up to the four-year [colleges]. We are having those discussions about how can we work together to tell you what we see is the upcoming future or challenges. How do we continue to expand those things? Whether it be worked-based learning, apprenticeship programs, all of those programs where we are seeing development, we are going to have to continue to work at them.”

This partnership can impact not only how students see and learn about plants like KMMG, but how teachers do their jobs, according to feedback that the company has received from participants in its LaGrange Industrial Fellowships for Teachers program.

“After her LIFT experience and after her time in the classroom, [an elementary school teacher] said that when the students are in their teams, if she sees a behavior that she thinks is not productive and she wants a way to explain to them how to modify their behavior, she talks to them in employment terms,” Hodges said. “She tells the student, ‘you are really not working with the team. I think you need to be laid off for a little while until you are ready to join the team again. Your job will be here waiting for you when you are ready to get back to work again.’ It is just using different terminology to try to get students really serious about the work they are doing in school.”

The LIFT program was created in partnership with local groups.

“The idea was to give teachers a chance to get out of the classroom and experience various companies within our local industry. With Kia for example, we hosted a team of four teachers,” Hodges said. “They spent almost an entire week here, and they shadowed various job functions in a variety of different departments. They use what they saw and what they learned to build, in their words in education terminology, a toolkit. A toolkit is something that they bring into the classroom that next fall, and they start to use what they’ve learned throughout the curriculum.”

“Kia is putting volunteers in the classrooms and investing in the curriculum and the training, so that teachers — not just in Troup County Schools, but also Meriwether, Harris, Chambers — get this hands-on STEM opportunity,” Hodges said.

“It has a variety of different programs. One of them is a toy car/jet car. Another is a motorized toy car, and it depends on the grade level and curriculum kits, but that is just another way for them to open their mind about, ‘oh my gosh, these manufacturers train people and send people to my classroom. They seem like they enjoy their job. Maybe that is something that I should consider thinking about my future.’”

Countess said that the future is bright for the company.

“Kia is still very popular in the U.S.,” Countess said. “There are more new model cars that are coming out, which draws interest to the brand. I think specifically where this plant is going to go, we are certainly looking at how do we grow this plant, but we also have to maintain the gains that we have made.”

He said that he hopes to maintain the same standards in order to see continued success at KMMG in the future.

“If we follow that same pattern, and receive the recognition that they’ve gotten over the last three to five years, it will always get taken care of that people want to buy your product,” Countess said.

“There is going to be a demand. I think our team members understand that.”

The Wait is Almost Over: In only a few…