Secret is getting out: Malone, Bush are telling LaGrange’s story, and industry leaders are listening 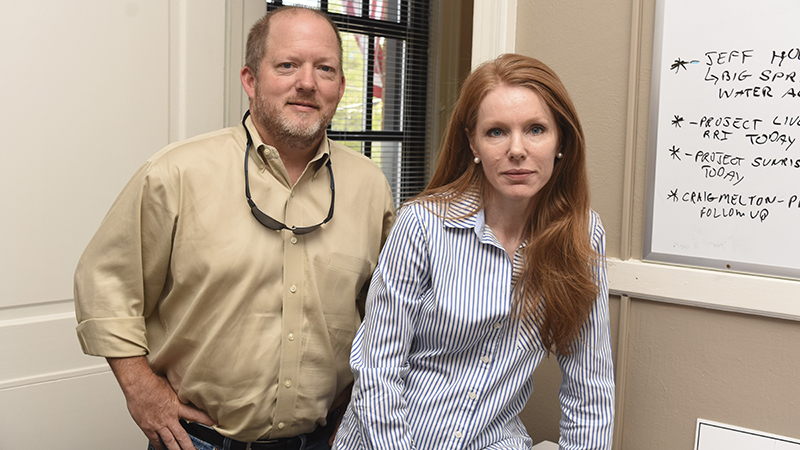 Scott Malone and Kelley Bush pose for a photo at the Development Authority of LaGrange.--Daniel Evans

Scott Malone and Kelley Bush are often called the dynamic duo for their work within the city of LaGrange’s Economic Development Office.

There’s nothing Malone enjoys more than the opportunity to tell LaGrange’s story, one that seems to be consistently growing right now. Bush isn’t as talkative, but her work is often what makes the overall vision a reality on paper, making it easier for industry leaders to understand.

“I’m really good at talking about it. She’s really good at making it real,” Malone said. “We can talk about it until we are blue in the face, but when you can articulate and put on paper what that vision is so that you can see it, understand it and realize it, it’s enormous and more valuable than what the original vision was. It brings it to life.”

Together, they are a large part of the reason LaGrange has $1.2 billion of capital projects and $800 million in capital investment projects in the pipeline.

“If you don’t tell your story, someone else is telling your story,” Malone said. “And our job is to make sure we are telling our story the way we want it to be told. People are truly understanding what it is. And that’s really what we’ve focused the last few years on. We’ve been telling our story that had never really been told before.”

There’s probably no one better at telling LaGrange’s story either.

Malone can quickly rattle off the 26,000 acre West Point Lake, symphony orchestra, $10 million Sweetland Amphitheatre and the 29-mile trail system under construction in LaGrange like it’s second nature. Malone said LaGrange is home to more Fortune 500 companies than any other city in America per capita.

“You start going down the list, and you start to realize we really have become a corporate center, on top of the strong manufacturing base that we have,” he said.

Malone said there’s a lot of talk about the new jobs and business coming to LaGrange, such as Great Wolf Lodge and Sentury Tire, but companies that have called the city home for a long time are also expanding.

“We have companies that have been here for decades that just this past year invested $400 million back in our community,” Malone said. “They have been here for decades, and they are expanding. What better testament to a community than that. It’s all fun to talk about the Seligs and the Great Wolfs and the Sentury Tires, but if you didn’t have that foundation of existing business and the 100 plus we have in Troup County of existing businesses we wouldn’t be able to attract those businesses and do some of those other things.”

Malone and Bush have traveled to China, Germany and Italy to recruit industry, and they are heading to Korea this summer. Together, they are going after the jobs that suit LaGrange best instead of sitting back and hoping those jobs find their way to LaGrange.

“We weren’t doing that before. We took whatever came to us, and we took the approach that instead of seeing what comes we need to go target specific industries that fit our needs that allow us to increase the level of jobs that are coming in,” Malone said. “We are going after high paying jobs, white collar jobs, engineering jobs, advanced manufacturing type jobs, and we’re traveling around the world to do that.”

Malone said there are many factors for LaGrange’s recent growth, including leadership, timing and location.

“We are geographically located between Atlanta and Columbus, the two largest cities in Georgia and then Auburn-Opelika, which has just exploded. They’ve all just continued to grow right to us. I tell people all the time, we were sort of America’s greatest city that was a secret, and it is getting beyond being a secret,” Malone said. “That high quality of life that we have is something we want to share with the world.”

Bush and Malone went after Amazon’s second headquarters too. They might’ve been the only ones surprised when Amazon chose to go elsewhere, which speaks to their mindset.

The development authority has also led efforts to launch the Georgia International Business Park, which was announced in March. It covers 10,000 acres of Troup County and is the largest business park in the southeast in terms of employees and size.

Malone uses a hockey analogy to talk about how they view going after big projects. He said it’s not as important where the puck is now, but where it’s going.

“We’re putting the pieces in place to not only benefit where we are today, but benefit [in the future],” Malone said.

“At some point, we’ll be long gone and just like our forefathers that set up the LaGrange Industrial Park and the Jim Hamilton Industrial Park. They did that a long time ago with a vision that we would be benefitting the way we are today. We hope the same thing is occurring with some of the things we are trying to do collectively as a leadership team for Troup County and our region.”

Preparing students for jobs: College and career academy is…