The Wait is Almost Over: In only a few weeks, Great Wolf Lodge will officially open its doors 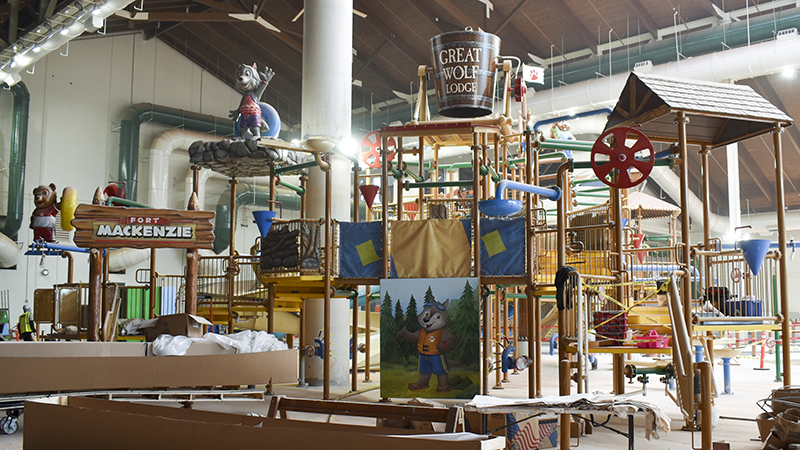 The water park at Great Wolf Lodge Georgia is shown. The park is expected to attract 500,000 tourists to LaGrange each year. --Daniel Evans

The countdown is almost over for Great Wolf Lodge.

In 2015, the indoor water park and lodge was announced, and in the two years since, all of the details have been worked out. The Whitesville Road exit on Interstate 85 is now impossible to miss for passersby, with the huge resort dwarfing over the trees and water slides sticking out of the side of the building.

Construction is almost complete and the lodge will hold a soft opening starting on May 7. The grand opening is scheduled for May 24 and reservations are being accepted for as early as May 18.

“Our booking pace is fantastic and looking back at the past four lodges that we’ve opened, we are outpacing every one of those operations,” said general manager Keith Furnas during an April tour of Great Wolf. “There is a lot of excitement.”

Great Wolf expects to primarily see guests who live within four hours of the resort, and LaGrange’s location within two hours of several large cities is working in its favor.

“The biggest part is coming out of Atlanta,” Furnas said. “We do have people coming from Birmingham, Montgomery, Columbus and just all sorts of areas in between and even outside those areas.”

The LaGrange location is the 16th Great Wolf in the country, and it’ll have amenities not featured in other resorts. Furnas has called Great Wolf Georgia the company’s flagship resort.

There are many features that make LaGrange’s Great Wolf different than the other 15 locations, but the biggest two attractions might be the Triple Thunder and Rapid Racer slides. Both are new to Great Wolf and figure to be a big hit. The water park will also include a lazy river, wave pool and kid water play areas.

Other amenities include games, shopping outlets, a kid’s spa and numerous restaurants. Barnwood, one of the featured restaurants, will have a menu with food sourced from within a 100 mile radius of the resort. Although the water park will not be available to open who doesn’t stay at Great Wolf, the other amenities will be available to everyone. Those include mini golf, mini bowling, all of the restaurants and shopping.

Many locals have seemed unclear on what will be open to people who do not stay overnight at the park. Furnas said only the water park would be off limits to guests who aren’t staying at Great Wolf.

The convention center will also be open to businesses and other community organizations that want to rent it out.

Great Wolf is expecting to hire as many as 750 “pack members” and began events in April to try to fill those positions. Only a few days after the hiring event started, Great Wolf had already hired hundreds of people.

Furnas said it’s important to Great Wolf to not just be a business in LaGrange. They want to also way to be good community stewards.

“We are a good partner to the community, and we don’t want to be the big place out on exit 13 that just stands out there alone,” Furnas said. “I’ve already talked to some folks about fundraising, and we want to be a part of community events where we can be of assistance there.”

The city of LaGrange has been preparing for Great Wolf’s opening since it was first announced. In October of last year, Police Chief Lou Dekmar said the police department and city have discussed whether there will be increased traffic due to the estimated half a million extra visitors expected to stay there each year.

“When Great Wolf was first announced, we reached out to a couple of the departments (in cities and counties) where they have located, and they didn’t see any significant issues as it related to traffic or crime,” Dekmar said in October.

Great Wolf Lodge was the featured business at April’s Early Bird Breakfast at Del’avant and Furnas was the guest speaker. He talked about all the resort had to offer and finished with a reminder that Great Wolf is coming, and that it’s planning to bring a lot of people with it.

“We’re looking forward to getting started,” he said with a smile. “We’ll be bringing over 500,000 people on an annual basis, so I hope you guys are ready.”

Providing the Support: Often behind the scenes, the Callaway…