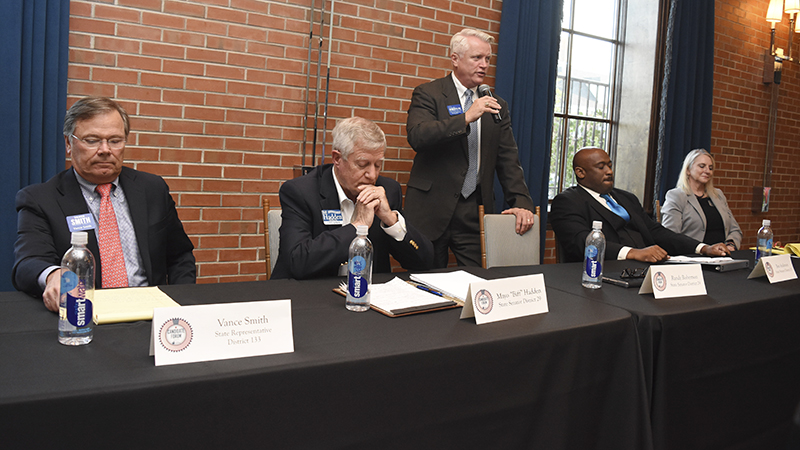 Four candidates for state senate district 29 and one candidate for state representative district 133 participated in a forum Tuesday evening at Del’avant.

The candidates were each asked ten questions and given two minutes to answer. Democrats Ben Anderson and Valerie Haskins and Republicans Randy Robertson and Mayo “Biff” Hadden discussed their platforms, while trying to distinguish themselves from the other candidates in district 29. Early voting has already started and the winners of the primary election May 22 will move on to the general election in November.

Vance Smith also participated in an effort to campaign for the district 133 seat in the house. His opponent, Chris Gyening, was not able to make the meeting due to military orders, according to his campaign manager Traci Amiri. Amiri spoke during closing statements on Gyening’s behalf. Both candidates are Republicans and have no Democratic challenger.

The forums were hosted by the LaGrange-Troup County Chamber of Commerce. Here’s a look at some of the topics discussed Monday:

In the wake of a number of recent mass shootings, candidates were asked what the government should do to prevent criminals and mentally ill people from acquiring guns.   All five candidates said they stand for the second amendment, but there were varying solutions to the nation’s ongoing gun debate.

Anderson said he believes more social workers are needed in schools, rather than additional police officers.

“We need less police officers and more social workers and therapists to monitor these kids’ emotions and situations at home to watch out and see how they are thinking,” Anderson said. “I think that would be a better solution then adding more guns and police to our schools.”

Anderson also believes the legal age to carry a gun should be raised to 21, unless the person is law enforcement trained or military certified.

Haskins spoke first on the issue and discussed many of the stats involving gun violence in Georgia. She said at the end of the day common sense is the answer.

“I am for the second amendment. A lot of people ask me that,” Haskins said. “Of course, I am, but I think we need to have common sense gun laws.”

The Republican candidates mostly agreed on their stance — that the Virginia model for Student Threat Assessment works in evaluating dangers in schools and ensuring students are safe.

“I am a strong proponent of the second amendment,” Robertson said. “As far as those with mental health problems getting weapons, the current background check that is in place right now addresses a lot of those issues.”

Hadden, a green beret and purple heart recipient, said his military experience makes it a given that he backs the second amendment, but he said he has discussed the issue with officials he knows in the Bureau of Alcohol, Tobacco and Firearms and Explosives and the FBI. He said he would be in favor of additional days to complete background checks. Smith said the key is more coordination between the sheriff’s offices and the schools.

The candidates were asked about the stance Lt. Gov. Casey Cagle’s took on Delta Airlines after the company cut business ties with the National Rifle Association. Cagle led the charge as senators pulled a lucrative tax exemption that would’ve benefitted Delta from a wider tax proposal. Four of the candidates said that Cagle should not have interfered.

Hadden said it was wrong for the state to interfere.

“We reacted on emotion. If you believe the statistics, I think there were only 12 individuals who had ever taken advantage of the NRA incentive,” Hadden said. “The publicity that it cost the state has not been anything short of disastrous.”

“We want business to come to Georgia,” she said. “We don’t want to scare them off.”

Smith said he wasn’t going to question or judge the decision by Cagle. He said the bigger question is looking at all the incentives that have been given to companies in Georgia for years.

“Some of those have been on the books for years and never had a sunset,” Smith said.

The candidates were asked if the state of Georgia should approve a ban on abortion after 15 weeks, a law the state of Mississippi passed earlier this year. All five candidates quickly answered, taking no more than a few seconds to answer.

Each candidate had two minutes to respond to each question, but the abortion discussion was about a minute and a half long in total, including several one-line answers.

“I believe the state of Georgia should pass a ban on abortion,” Robertson said, before sitting back down.

Hadden also said he was pro-life.

“Nobody can actually identify when a person has been conceived and when they were given life,” Hadden said. “I think it is inherently wrong, and I know it is against my faith to try to make an arbitrary decision on when that is life, so I disagree with abortion completely.”

Smith said he would be for a ban on abortion after 15 weeks.

Haskins, who is a mom and grandmother, said she is for women’s rights.

“I think it’s interesting and telling how men can sit there and tell a woman what she needs to do with her body,” Haskins said. “I think women need to be in control of their body.”

Anderson said he agreed with Haskins, that it’s up to a woman to make a choice about her body.