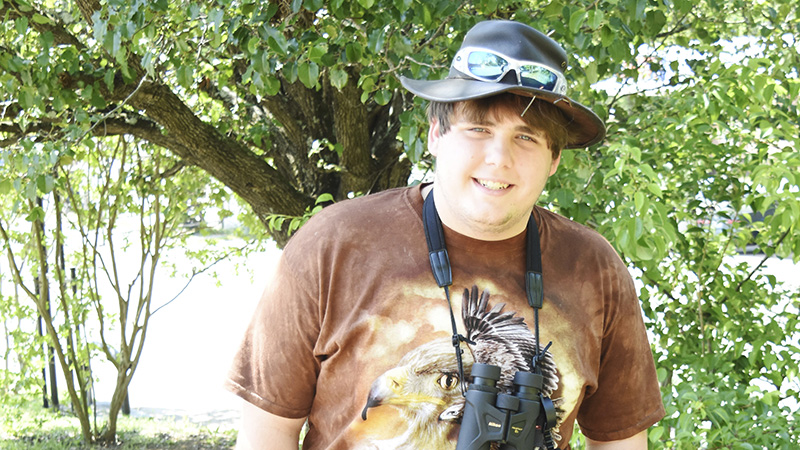 Knox Evert was on the winning team at the Georgia Youth Birding Competition. Evert, 18, has been participating in the contest since he was in elementary school. --Daniel Evans

Just about everybody enjoys taking a break from the hustle and bustle of the real world, and there’s no place better to do that than in the outdoors.

To Knox Evert, there’s no place he’d rather be. But most of the time you won’t find Evert hunting or fishing. He’d rather be looking through a pair of binoculars, looking for rare birds.

“When people ask me why bird watching is so interesting or fun, the way I try to explain it is it’s almost like a scavenger hunt because there are all these types of species of birds across the United States,” Evert said. “I like to add them. I have a goal to see as many species as possible.”

Evert was one of several students from LaGrange that took part in last weekend’s Georgia Youth Birding Competition, hosted by the Georgia Department of Natural Resources. The event gives teams a 24-hour period to count as many native bird species as possible.

Evert was one of 80 youth from around the state that participated. His team the Wood Thrushes won first place with 161 species counted. Other members of the team were Allan Muise of Lamar County, Nick Christian of Decatur, Ewan Pritchard of Decatur and Philip Black of Atlanta.

Evert also helped coach the AAJ Eagles, an elementary division team, and The Cardinals, a primary division team. For his time helping the other teams, Evert won the Mentor Award.

“It meant a lot to me to be able to pass that knowledge on to younger kids and pass on my passion,” Evert said. “It’s one of those things that once you get into it, it’s super fun, and I want to send that on to other people so that other people can enjoy it.”

Evert has seen 323 different species of birds in North America, excluding Hawaii. He has also gone birding in New Zealand and Scotland.

He first competed in the Georgia Youth Birding Competition at age 7, and his team spotted a rare yellow headed blackbird. He’d been on teams that won the age group contest, but never the overall competition.

That changed this past weekend.

Other LaGrange area students that participated were Asher Watts, Amos Nehring and Julia Nehring — all of the elementary team — and Keeper Evert, Canaan Watts, and Isaac Nehring of The Cardinals.

Knox, 18, is a homeschool student who played football at Lafayette Christian School. He plans to attend Belhaven University in Jackson, Mississippi. He’s already connected with a professor at the school who enjoys birding and hopes to start a birding club at Belhaven.

Knox also won one of two full ride scholarships from the Georgia Ornithological Society to attend the American Birding Association Youth Camp in Colorado this summer.

WellStar honors Kevin Dunn as Volunteer of the Year