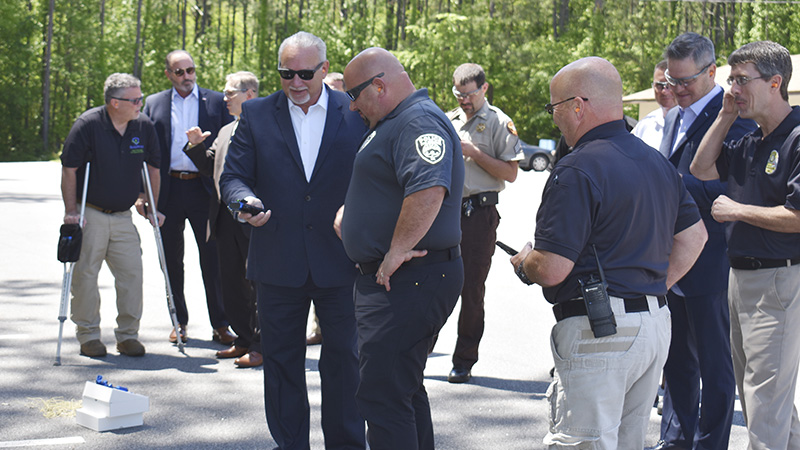 Law enforcement agencies, including the LaGrange Police Department, try out the BolaWrap earlier this week. --Contributed

The device, called a BolaWrap, is a hand-held piece of equipment that deploys an 8 foot Kevlar rope. The rope entangles people at a range of 10 to 25 feet according to the Wrap Technologies website. The manufacture claims that the device uses less force than a Taser or pepper spray.

“Unlike the other tools that we have, it is unlikely that this would cause any kind of pain to anybody, but I want to be cautious at this point,” LPD Lt. Eric Lohr said. “We are still evaluating the product.

Local law enforcement representatives said that it was unclear if the technology will be adopted locally at this time, but it will be considered, according to Lohr and TCSO Sgt. Stewart Smith. The LPD plans to continue testing the product before deciding whether officers should use it.

“It is a brand-new product, and we are still having to evaluate it,” Lohr said. “If it is a viable option as another tool for our officers on the street, it could certainly help us restrain people in limited circumstances.”

According to a press release from the City of LaGrange, LaGrange was chosen as one of ten communities to test the device in because of its reputation.

“Chief Lou Dekmar is innovative when it comes to mental health initiatives,” said Michael Rothans, a BolaWrap representative and retired Los Angeles County Assistant Sheriff. “We definitely wanted to work with him. The BolaWrap is a restraint device designed to quickly restrain an individual with minimal to no pain.”

Part of the LPD’s consideration for using the device will be that ability to restrain those facing mental illness in a way that is safe for both the officer and the person facing the illness.

“Mental Illness is one of my priorities,” said Dekmar in a press release. “Any innovation that reduces the likelihood of injury to an officer or someone that’s affected by mental illness is an innovation worth piloting.”

While the LPD hosted the event, other local law enforcement representatives were excited to see the new technology.

“We are very honored to be included in this demonstration,” Franklin Police Chief Kevin Hannah said in a press release. “Chief Dekmar has been gracious in including area law enforcement including the Franklin Police Department in the latest innovations. If it weren’t for him, I wouldn’t know anything about the BolaWrap.”

Dekmar is the president of the International Association of Chiefs of Police.