WellStar honors Kevin Dunn as Volunteer of the Year 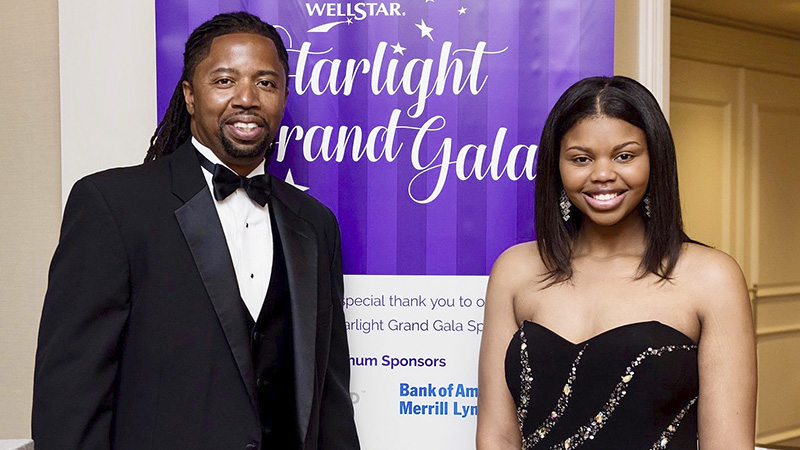 For almost 16 years, Kevin Dunn has volunteered at WellStar West Georgia Hospice once a week, singing to “whoever will listen.”

He walks through the halls, stopping in each of the four living areas where patients’ families and friends gather. As he sings acapella, the sounds of “The Old Rugged Cross” or “Blessed Assurance” reach to the top of the vaulted ceilings and can be heard faintly in the patients’ rooms.

Doors to the patients’ rooms often begin to slowly open to welcome the music in. Sometimes he is invited in their rooms to sing, and sometimes patients are hearing his songs as they transition to death.

“I hope people are hearing God’s voice through song,” Dunn said. “That is my prayer before I go every Monday — that they will have peace.”

For his commitment to serving patients and families at West Georgia Hospice, WellStar Health System recently chose Dunn as its 2018 Volunteer of the Year. Chosen from the hundreds of volunteers from WellStar’s 11 hospitals, Dunn was honored at WellStar’s Starlight Grand Gala in Buckhead in late April.

Dunn began singing as a teenager after watching the TV episode of “Good Times” when Michael sings as a gift to his sister, Thelma, at her wedding. Dunn decided right then he would sing at his own sister’s wedding one day. He secretly practiced, perfected and then publicly performed “We’re Going All The Way” on her big day.

Many in LaGrange know the story of how Dunn began singing at West Georgia Hospice: In 2002, he was sitting at a traffic light after dropping off his kids at school. He’d been pondering sharing his gift of song at local nursing homes.

But at that red light, he said, God said one word to him: “Hospice.”

He walked through West Georgia Hospice’s doors that day and has been back virtually every Monday since.

He took three weeks off two years ago, when he was facing the greatest heartache of his life. He found himself at hospice not singing, but sitting with his children by the bedside of his wife, Deborah Dunn, as she passed away from cancer in July 2016 at age 49.

It was the first time since volunteering at hospice for 14 years that he had ever sat down inside its walls.

“It was something I never imagined taking place at that time in our lives,” Dunn said. “I said to God, ‘Why is this happening? Surely I have given of myself enough to you?’

And then a friend of mine said something that made me see my situation from a different perspective. He said, ‘It could be that through your music, God was preparing you.”

“And when I look back, I know that seeing how caring and attentive everyone is and what all hospice has to offer, that it really did help me during Deborah’s time there. Before I began singing there, I’d had the misconception that hospice is only about dying, and it’s not. It’s also about helping patients live comfortably during their final days and about helping them and their families have peace.”

Fulks said through the Dunn family’s pain, those who work at hospice were able to give back to Dunn in the way he had given of himself to them for so many years.

“Kevin has been an angel to so many people,” Fulks said. “We hope that’s what we were able to be for Kevin and his children when Deborah was at hospice.”

Jan Marshall, who was at hospice this past Monday with her family when Kevin was singing, said she has heard him before when other family members were served by hospice.

The singing was an extra comfort for Marshall’s loved one who was passing, as Dunn had sung at his wife’s funeral seven years earlier. Dunn also spends time talking with families at hospice, and they often ask him to sing at their loved one’s funeral, which he does for no fee.

“He sang, ‘Go Rest High On That Mountain,’ at her funeral, and when Kevin sings it now, you can see him get so relaxed and calm as he hears it,” Marshall said. “Families tend to schedule visits around when Kevin is going to be here. His singing brings a closeness to everyone in the room.”

Dunn volunteers amidst a busy family and work schedule.  He works for WJCN in LaGrange, which bills itself as “community network television.” On air, he does news and weather and has hosted a talk show. He also sells advertising for the station, which is seen in 11 counties in west Georgia and east Alabama.

Dunn said he believes so much in the care provided by West Georgia Hospice that he began an annual community concert three years ago.

Admission is free, and the proceeds from the love offering gathered are donated to hospice. He has donated about $14,000 to West Georgia Hospice in the past two years and is holding a third concert, “A Night of Worship and Unity,” Friday.  The concert also will feature the Pilgrim Baptist Church Ensemble, “Chosen” from Faith Baptist Church, The United Benefit Mass Choir and other singers from surrounding communities.

The free concert will be held at 7 p.m. on Friday at New Community Church, 1200 S. Davis Road in LaGrange.