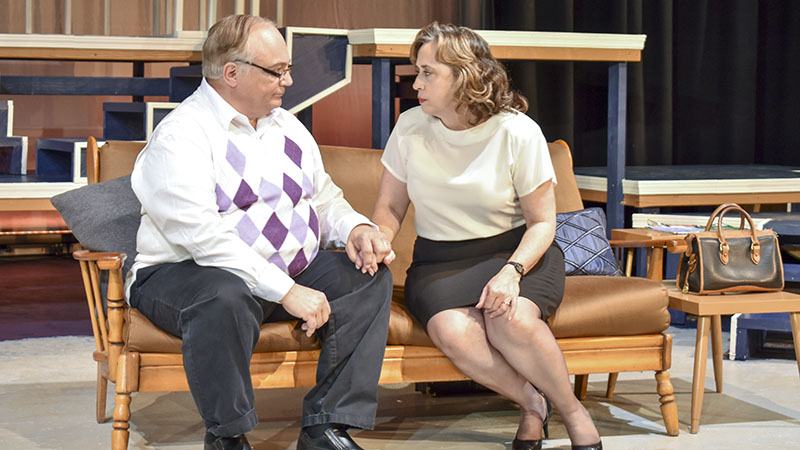 Jake, played by Jack Bagley, and Maggie, played by Carol Cain, talk about their marriage. (Alicia B. Hill | Daily News)

On Thursday, the Lafayette Theatre Company held its opening performance of ‘Jake’s Women,’ a play by Neil Simon.

The play focuses on main character Jake’s struggling marriage, writing career and the psychosis resulting from that struggle. Despite the dark subject matter, comic moments break through the tension of this dramatic performance.

“Jake’s Women is another of Neil Simon’s shows that demonstrates his genius in writing dialogue,” said Jeff Sargent, the director. “He is able to combine aspects of hard hitting drama with hilarious comedy in a way that keeps the audience engaged and entertained.”

The LTC production brings both returning actors and new performers together on stage.

“It is a great cast,” Sargent said. “We have several new faces. This is LeKae Ford’s theater debut here.  This is Anabelle Kelley’s on stage debut. She has worked backstage with us for over a year, and this is Becca McDow’s mainstage debut, but she has done a lot of children’s theater. So, we have new faces on the stage, and we are happy to have that.”

While some members of the company have performed together for decades, new performers also felt welcome.

“This is actually my first play, so it is really a great way for me to get introduced to the Lafayette Society for Performing Arts,” said Ford, who plays Shelia. “It is not only my first play, but it is another young lady’s first play as well, and it is very interesting the different dynamics — how we are able to learn from the highly-qualified actors and actresses. It is a great experience how we are able to join together and give that positive feedback off of each other.”

For experienced performers in the company, the play is an opportunity to expand their repertoire.

“For me there is a chance to do something different, and something familiar,” said Carol Cain, who plays Maggie. “The something different is I’m playing more of a dramatic role in this comedy than I usually do. I’m used to having fun, comic roles, and I have to be pretty serious in this play. I am being serious about a very painful topic — a marriage that is falling apart — and that is a huge step for me to play this role, but also quite a dramatic risk.”

Cain said cast members made that risk easier though.

“The something familiar is I am in the company of people that I know and love and have known for years,” Cain said. “Jack [Bagley] playing my husband is a very natural fit. We’ve been married on stage once before, but we’ve worked [together] many, many years ago on WTRP radio. That was 37, 38 years ago, so we’ve known each other a long time, and there is great comfort in being on stage and having these really intimate, dramatic moments with somebody you trust.”

Bagley agreed noting that the cast is very talented.

“This is one of the most talented casts I’ve ever worked with, and Carol is right, when you trust the people you are on stage with, you can just relax and enjoy what you are doing,” said Bagley, who plays Jake. “And I do. I trust these people with my life.”

Bagley depends on his cast mates for support in this performance the most since he will be on stage for the entirety of the show.

Bagley said that he has about 55 years of experience on stage.

Jake’s Women will be performed by the Lafayette Society for Performing Arts’ Lafayette Theatre Company on May 4, 5, 10, 11 and 12 at 7:30 p.m. at the LTC Black Box Theatre. A matinee showing of the play will be performed on May 6 at 3 p.m. This is a picnic event, so outside food will be allowed. Tickets cost $17 for adults and $12 for students. For more information or to purchase tickets, visit Lsparts.org or call (706) 882-9909.

National Day of Prayer: Locals gather to pray for…