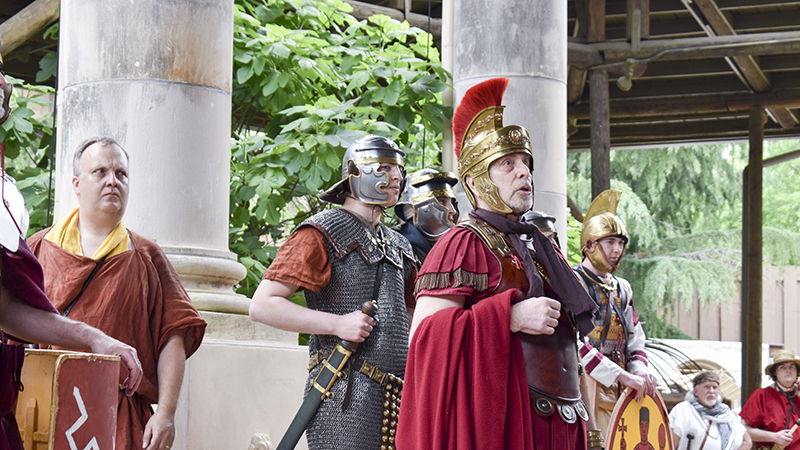 The reenactors from Legio XI wore different kinds of armor, which they said would have been a common practice during ancient times due to the cost of having new armor made. (Alicia B. Hill | Daily News)

On Saturday, Locals got to peak into what Jerusalem would have looked like during the Roman occupation when Legio XI marched into the Biblical History Center.

Men in full Roman uniform displayed how the Roman justice system would have worked and discussed history and uniforms with visitors at the annual event. The Romans ruled Judea from 63 BCE to 135 CE. The Biblical History Center has a tile that was created by the tenth legion during the Roman occupation in its museum.

“The tenth legion was stationed in Jerusalem or the northern Judean providence,” said Chris Stewart, a member of the Legio XI reenactment group. “We are the eleventh legion, and we would have been stationed in that middle European area and were there for several hundred years.”

The minor differences between the legions could not overshadow the experience of watching Roman soldiers step into fighting formation or hearing a border dispute that would not be out of place in a modern city council meeting. The crafts and bread making stations likewise perfectly displayed how the world has changed in many ways, while some things stay the same in a common desire for good food and beautiful surroundings.

The history center and the event stripped audiences of those differences though.

“Sometimes it is difficult for people who live in the 21st century to conceptualize life in year four or to conceptualize life in year 227 B.C.,” said Morgan Cantrell, the curator for the Biblical History Center. “We live in a world where we have Google. We have internet on our phones. We have mail, which is something that they didn’t even have back then. We have all of these wonderful contributions to our daily lives that make it rather easy and care free, and we can’t conceptualize a time and a place where those things don’t exist. Especially a time as far back as the ancient classical world [is difficult to imagine], so here at our museum, Roman Army Day is an opportunity for visitors to visit with us and actually time travel a little bit — to go back to a place where you have to grind your own grain. You have to smash your own grapes, your own olives for juice and oil. This is a place where you can actually experience the ancient world.”

The event also highlighted the major issues of that time, like taxation that could reach 80 percent of a citizen’s income and favoritism for Roman citizens.

“Understanding that Israel was conquered by Rome in 63 BCE — and of course as we know, Rome destroyed Jerusalem and continued to hold occupation over it — this gives people an understanding of what was going on politically as well as religiously during that period of time, which helps them better comprehend what they read about in the Bible,” said Derrick Lewis, the chief operating officer of the Biblical History Center. “So, just understanding that the Roman soldiers were there, doesn’t necessarily tell you what they were experiencing.”

The event attempted to tell the rest of the story.

To learn more about the Biblical History Center, visit Biblicalhistorycenter.com or call (706) 885-0363.

FACES to hold Community Fest May 19