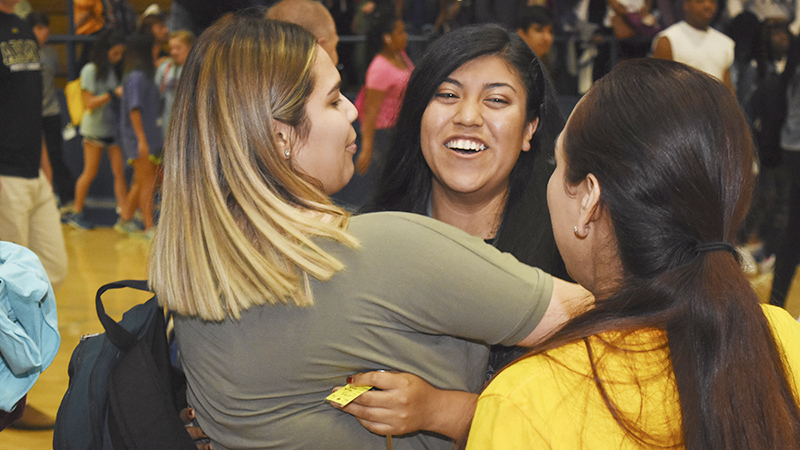 Students at LaGrange High School gathered in the school’s gymnasium Thursday, hoping to hear their name called as one of 10 finalists for a chance to win a new car. Jennifer Espinoza’s name was the second one called, but no one got up and assistant principal Jamie Bozeman moved on to the next name, thinking she wasn’t there.

“[The name] was kind of scribbled and I said Esposito,” Bozeman said. “Then I looked at it and said, ‘no that’s Espinoza’ and then she didn’t know or didn’t quite hear me.”

Bozeman didn’t know what to do, but he and principal Alton White decided to move on to the next name. After another student was called, everyone realized Espinoza was in the crowd, but didn’t hear when Bozeman corrected her name.

She was urged by friends and administrators to take one of the seats in the middle of the gym floor, reserved for the 10 finalists.

A few minutes later, Bozeman called her name again, and this time he got it right. And this time, it wasn’t just for a spot in the final 10 — it was for a brand new 2018 Toyota Corolla. The car was donated by LaGrange Toyota and dealership owner Michael Stogner, a 1988 LaGrange High graduate.

“I couldn’t believe it,” said Espinoza, a junior at the school.

All three high schools in the Troup County School System are participating in similar contests this year, with one student in each school winning a brand-new vehicle.

Espinoza, 18, couldn’t drive the car Thursday because she doesn’t have a driver’s license yet. She plans for that to change soon. Before Thursday, she hadn’t considered getting a car in high school.

“Maybe after graduating from high school, but not right now,” she said. “[My focus] was mostly other things, like finishing school, taking my exams, passing them,” Espinoza said.

The contest was meant to encourage positive behavior, good grades and near-flawless attendance.

Bozeman said students could miss no more than five periods all year, had to have at least a 70 in every class and not be suspended at any time in the school year.

Last year, five students at LaGrange High would’ve qualified for the giveaway. This year 150 made the cut.

“We had a terrible flu season or we would’ve have more,” White said.

Each student in the final 10 won a prize, including Adidas apparel, tickets to Six Flags White Water, Beats by Dre headphones, a Playstation 4 and a Xbox One S.

The other prizes were paid for by the LaGrange High School PTO and West Georgia Paint and Body, which donated $1,000. Stogner said it meant a lot to give the car away to a student at his alma mater.

He said he plans to donate another car next year.

“I’m sure there were days she woke up, she didn’t feel good and came to school any way. On top of that, she’s an AP honor student,” Stogner said. “It’s a huge win for LaGrange High.”

Espinoza said the contest motivated her this year, and she hopes it’ll do the same for other students in the future.

“They have another chance next year and anybody can win it,” she said. “Stay in school and study.”